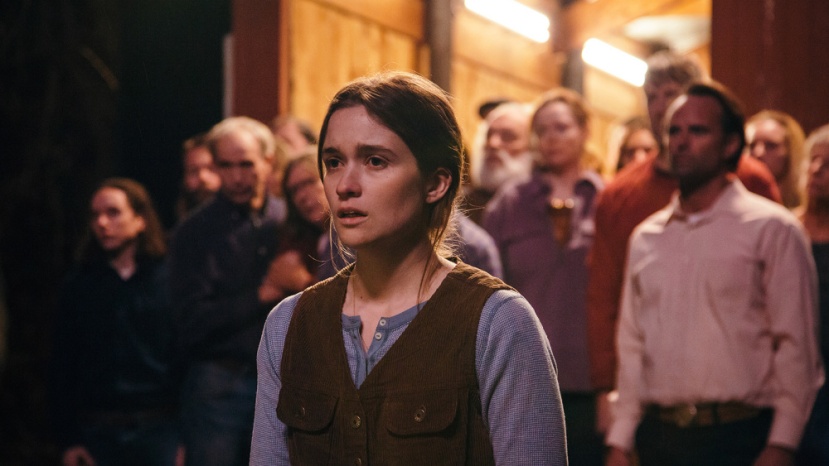 The opening scene has venomous snakes slithering, over and around each other somewhere remote in the Appalachian mountains. They are being watched by Mara (Alice Englert) and Augie (Thomas Mann), two young adults. Mara says the snakes are beautiful while Augie says that she is beautiful. The remoteness of the location is important as they are part of a community that exists outside of societal norms. Everything is determined by a belief in an all-powerful God whose good work is always under threat of being overwhelmed by the Devil and his evil deeds. Mara’s father Lemuel (Walton Goggins) is the fire and brimstone preacher of this small, entrenched community who practise what St Mark states in the Bible “they shall take up serpents” (Chapter 16). Pastor Lemuel believes the handling of venomous snakes is an act of redemption for someone who has sinned. If not bitten you are in a state of grace. If bitten, the ability to survive is determined by your ability to pray to God for forgiveness. Doctors and law enforcement agencies are all part of the Devil’s schemes and therefore are excluded at all times from the community.

Into this black and white world of good and evil, the complexities of ordinary life inevitably intrude. Augie has no desire to stay in this society as he does not believe and has plans to leave. His mother Hope (Olivia Coleman) is a true believer as is her husband Zeke (Jim Gaffigan). In this structured society where women have little independence, Mara finds herself engaged to a young lad called Garrett (Lewis Pullman) who has only recently been “saved”. However, problems arise in relation to the preparation for her marriage. As a result, the whole essence of this closed and secretive community is upended.

Apart from the flashing tongues of the poisonous serpents, as they are venerated in religious ceremonies, there are (in the latter part of the film) grim scenes of violence against a woman. At times it is not easy to watch. It is tense but what draws the viewer in is the quality of the acting which never falters.

It is an impressive cast and while there is little or no explanation as to why this extreme form of fundamentalism is able to exist in the twenty-first century there is never any doubt that the characters all, with the exception of Augie, are true believers. There is apparently a cohort of the population who need simple answers to complex questions. A fundamentalist reading of the Bible provides these answers for these folk. There is no analysis of why this community is like it is. What is worrying, as the twenty-first century proceeds, is that simplistic solutions to complex problems are not confined to a  small religious community in some remote mountainous part of North Carolina.