Redemption Falls is a novel written by Joseph O’Connor in 2007. It was described by the Guardian as a “huge dishevelled monster of a book, crammed with all manner of typographical stunts”. It is not a straight forward narrative and is instead filled with “posters, verses, letters, doodles, extracts from notebooks and newspapers, snatches of ballads, transcripts of documents and stories within stories”. As you would expect, it is not the easiest work to convert for the stage, but that is the task that Moonfish Theatre have taken on with this work.

For those who pay attention to such things Moonfish are no strangers to O’Connor having converted the Star of the Sea in 2015, which was again part of the Dublin Theatre Festival. This new work is described as ‘Freely adapted’ from the novel, so it is a loose adaptation at best, taking the basic story line as its structure.

The play is set in 1865 during the American Civil War and tells us about a number of different characters. Jeremiah Mooney is a young boy who ends up becoming involved in the war as a drummer boy. When his older sisters Eliza Mooney realises he is gone, she decides to follow him to try and get him back. The story follows her journey across the States and what happens to Jeremiah. There are also a multitude of other strands and ideas in the plot, as we see different elements of this developing country.

The story is told mostly through music and we hear a number of songs. The seven actors on stage all sing and play musical instruments, with guitar, violin, keyboard, double bass and percussion all featuring. There are a variety of different styles of music but it is mostly folk of some description, either Irish or American.

Another interesting touch is the use of projections onto the back wall of the set. These are created by one of the performers who is on the side of the stage. A camera is used to captured the images and project them onto the backdrop.

This is a very ambitious work that tries to give a flavour of the book through song and story. The tale is a sprawling one and it would be extremely difficult to convey it by more conventional methods. While the performers deliver text on stage, for the most part their talents are as musicians and there is an emphasis on the sounds over the story. The music works very well for the most part, although there is a section with louder electric guitar that seems quite incongruous when immersed with the rest of the mellower sounds. Some of the vocal harmonies are very well done and that is when the play really lifts off. It’s an unorthodox work that tries to capture the fleeting spirit of this unconventional novel. 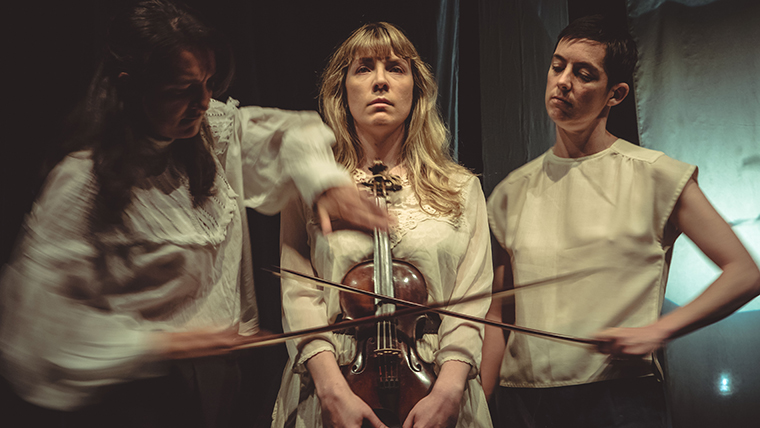