We had the chance to put some questions to Tom Swift, writer of the new production Bingo Wings. The show aims to combine the ‘best of circus and theatre’. You can find the results below.

Bingo Wings is at Siamsa Tire, Kerry, on 9th October, and An Grianán Theatre, Letterkenny, on 18th & 19th October – find out more here.

Can you tell me how this production came about?

Bingo Wings is a project that has been about five years in the making and like all the best ideas, it just refused to go away, despite various setbacks and personnel changes. It’s great to see it finally taking flight!

Who came up with the initial idea and when did you get involved?

The idea is inspired by the childhood experiences of Chantal McCormick, Fidget Feet’s Artistic Director. Growing up in Donegal, her grandparents brought her to the local Bingo hall every week, where her Grandad Patsy was the bingo caller. The word she uses to describe the experience is ‘magical’. She was passionate about creating a show that brought that sense of wonder and excitement to life, and also about telling a story that combines the best of circus and theatre. When Jo Mangan was brought on board to direct the show, she asked me to work with her, Chantal and Jym Daly, Fidget Feet’s musical director to develop the script.

Can you tell me a little about the premise for this story?

The story is my off-kilter take on the Romeo and Juliet story, set in 1970’s Donegal.  The story begins in Ballydawn, a small fishing port that is in the grips of Bingo Fever.  Everyone in town dreams of scooping the huge Snowball jackpot and escaping to a more glamorous life. But when star-crossed lovers Jimmy and Moya try to rig the game, Fate, Family and a giant storm get in the way. 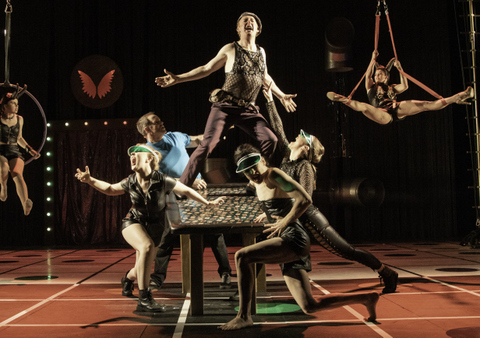 As the writer of a performance that includes “circus, aerial dance and theatre”, can you explain how you interacted with the Choreographer and other more physical elements of the story?

Before really getting down to work on the script, I wanted to discover what can Fidget Feet’s performers can do. The answer, I discovered, was pretty much anything! They can fly, climb walls, fall from the sky…  Once I understood the range of skills they have, it began to inform the story and I was able to imagine how these physical set pieces could be very effective storytelling devices. For example, the performers’ ‘Fabric’ routines got me thinking about the Donegal clothing industry, and so, one of the characters ends up working in a kind of hellish Fruit of the Loom factory. The show also has a big MGM type fantasy scene, in which the performers’ flying skills came in very handy. In terms of the collaboration with Chantal, I would write a short description of the scene and the type of apparatus or skills I imagined being used. She would choreograph it and then with Jo’s direction we would tweak it to ensure the story was coming across.

How involved have you been in the rehearsal process?

Rehearsals for this kind of show are very technical and involve a lot of rigging and choreography – areas I don’t have a lot to contribute to! However, I was heavily involved in the first rehearsal sessions, when we were trying to figure out what this circus/theatre hybrid was all about, and trying to agree on our aesthetic. After that, my input was really focussed on storytelling and ensuring the narrative stays clear and compelling right to the end of the piece. 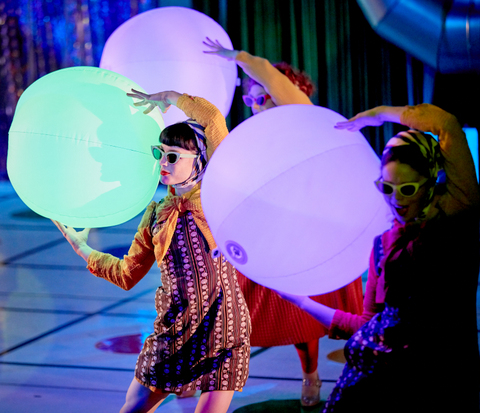 Has the script changed much over this time?

Not a lot, but there are sections where we’ve stripped out dialogue because it was clear the physical performance was telling the story more effectively. As with any script, the themes of the piece have become clearer over time. I think Bingo Wings is asking questions about fate and chance. Is our life strictly governed by fate? How much agency do we really have in this life? Does it make a difference when we don’t take the opportunity to do the right thing?

You have worked on many site-specific works as part of the Performance Corporation. Do you ever find a new location and think ‘I’d love to write something for this space?’

This happens to me all the time, but for some reason the sites that set my imagination racing are always in old buildings that are in a shocking state of disrepair. From bitter experience, these types of site involve a lot of challenges and a lot of dust and grime. Having said that, it’s always a thrill to create work that gives audiences access to places they aren’t normally allowed into – in a sense, that’s what theatre’s all about.

What are you working on next? Any plans you’d like to tell us about?

I’m very excited about my current project with The Performance Corporation, the company Jo Mangan and I run. It’s called Emperor and mixes live performance with Virtual Reality work. It’s due for performance in Dublin next year. I’m also working with the brilliant Barnstorm Theatre Company on a new show for children called Alice and the Wolf – a version of Little Red Riding Hood for the online world. It premieres in springtime next year.