Part of the Dublin Theatre Festival

Hecuba (Aislin McGuckin) is in the throne room of her ruined city. She holds the decapitated head of her husband Priam, the King. The city of Troy has been destroyed and her male children have been slaughtered. She waits for the arrival of Agamenon (Brian Doherty), the leader of the Greek army. He has designs on her and her daughters.

This is a play by Marina Carr, who is known for such work as ‘By the Bog of Cats’ and ‘Woman and Scarecrow’ which were both produced by the Abbey Theatre in recent years. This play was originally produced by the Royal Shakespeare Company in 2015. It is quite a different take on the familiar tale, as in Carr’s version the Greeks are portrayed as warmongers, intent on destroying the civilisation of Troy.

Rough Magic’s production is in the round with the audience sitting on three sides and the cast members not currently on stage watching from the fourth. There is minimal set (by Sarah Bacon), with the main props being a collection of chairs which are scattered around the stage. The costumes of the Greeks are Army fatigues and those of the Queen and her daughters are simple, stylish modern clothing. The sparsity of the set and the intimacy of the actors, only inches away from the audience, heighten the mood and create an intensity.

There is a very strong cast, with the two main parts being Hecuba (Aislin McGuckin) and Agamenon (Brian Doherty). Hecuba has quite a journey, from an initial proud and powerful woman to someone broken by loss at the end of the play and McGuckin is hugely impressive in this part. Her main sparring partner is Doherty, who plays the villain of the piece, a military man who shows little emotion. Owen Roe has a surprisingly small part as Odysseus, another king and member of Agamenon’s army. Martha Breen is also enjoyable as the cursed Cassandra, who is an outsider even in her own family. 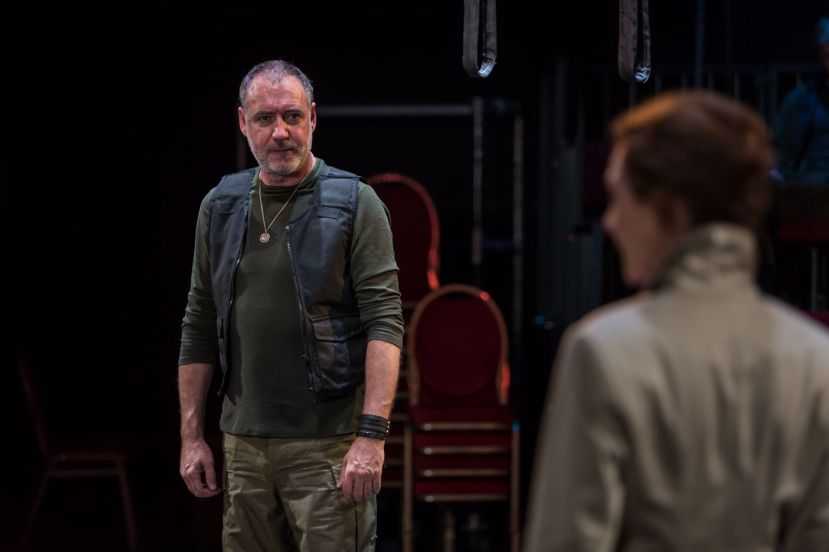 The story is told as a series of intertwined monologues, with each member of the cast telling the tale from their own perspective. It’s an interesting technique that gives an element of detachment from the script, allowing the audience to see inside the heads of the characters. It also removes us from the blood and guts of the plot, as we hear about the bodies piled up on stage but never see the consequences. This is a real return to form for Rough Magic and the director of this piece Lynne Parker. It’s the sort of meaty text she enjoys working with and along with the two hugely impressive leads, they have created something quite special. See it if you can.