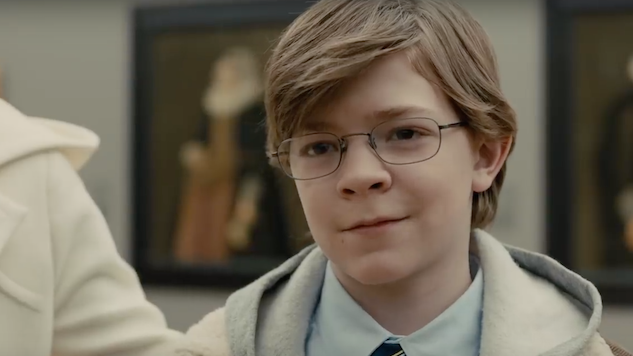 I haven’t read the 2013 Donna Tartt novel on which this is based but a fellow attendee told me it was very long. Actually, they said too long, which goes some way to explaining this movies 149 minute running time. There was clearly a lot to cram in. There’s also an extremely impressive ensemble cast whose agents all, no doubt, demanded a certain amount of screen time for them. Still – that’s a lot of movie to sit through!

Elgort and Fegley (an excellent child actor) take on the lead role of Theo (obviously Elgort is the adult incarnation and Fegley plays him as a young boy). His life is shattered when his mother is killed in an explosion at a museum. With his father out of the picture he is taken in by the wealthy Barbour family and grows close to its matriarch Samantha (Kidman). However, his world is thrown into disarray again when his father reappears plucking him from his life in New York and transplanting him to Vegas. Throughout all this his one constant has been a valuable Carel Fabritius painting The Goldfinch, which he stole from the museum on the day of the bombing. But thanks to the painting his fate becomes inextricably intertwined with some dangerous people and he finds himself on a dark path.

Visually this is stunning – it’s as if director Crowley has tried to make a living oil painting. The pallet is muted and there are many highly stylised shots. Unfortunately, this seems to be at the expense of the narrative. This is an extremely complex story with many more elements to it than the usual big screen offering. But rather than develop these it’s as if Crowley treated them as a series of individual scenes rather than winding them together in a coherent fashion. There are some lovely moments but they are brief and don’t last long enough to keep you engaged.

Fegley is fabulous as the young Theo. For such a young actor he has an amazing range and he’s very engaging. However, Elgort doesn’t carry this into the adult scenes and seems almost robotic in the role. Of the rest of the cast Paulson is impressive, Wright does a great job with an underwritten character and Wolfhard gives a good turn as one of Theo’s friends Boris. Other than these few performances the rest are pretty unremarkable – although this is also the fault of the script which, ironically given that this film is about an artwork, which is a visual medium, is very wordy but manages to say very little.

Like I said I haven’t read the book, but if the film is anything to go by then it goes on a bit. This felt like it could easily have been 30 minutes shorter. There are frequent flashbacks to the same scene in the museum and by the time it is on screen for the fifth or sixth time you are over it. Overall, it is dull with an unwieldy storyline this may appeal to those who loved the book but I fail to see who it will resonate with outside of that core audience.