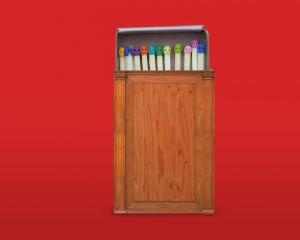 At the debriefing that follows immersive theatre piece The Justice Syndicate, co-creator Dan Barnard, a self-effacing and quietly-spoken Englishman, tells participants that their experience as a juror in the fictional trial they have just taken part in with a group of their peers is part of a project that aims to investigate the nature of decision making. “Take, for example, a referendum where we may have made the wrong choice,” he says, a wry smile on his face, going on to explain that often, once we have made a decision, we will alter our interpretation of data to support our choice.

This is what neuroscientists call “confirmation bias”, one of a number of factors that The Justice Syndicate manages to stage as each member of a jury of twelve (eleven in this instance, as juror number twelve mysteriously never materialised) comes to make a life altering decision on the fate of the defendant, a renowned paediatric surgeon charged with sexually assaulting the mother of one of his patients. Unfortunately, given the thought-provoking and informative nature of this piece, it is hard to imagine Boris Johnson, a perfect casting choice for the part of an angry man ill-suited to make consequential decisions, ever participating in fanSHEN’s dynamic and engaging piece of playable theatre. He could learn a thing or two if he did.

The Justice Syndicate is perhaps best-described as a mixture of role-playing, computer art, and focus group that manages to deliver a fast-paced and pressurised set up where participants must come to an important conclusion on the basis of the fragmented data fed through a tablet at their disposal. Its creators have provided the structure, setting and technology for each group of twelve to shape their own narrative as they attempt to fill in the gaps around the inconclusive evidence presented. The result of this process is as much a study of the interplay of individual personality and group dynamics as it is an enquiry into social and class prejudice and the inadequacies of the justice system.

fanSHEN has collaborated with neuroscientist Kris de Meyer to create The Justice Syndicate and the piece reveals information about decision making that we all ought to keep in mind when confronted with serious choices; but the reasons why each one of us arrived at our own individual decision remained hermetically mysterious as we exited The Benchers Room at the Four Courts. I realise now that as I stood in judgement of the fictional surgeon charged with sexual assault I also quietly judged the performances of my fellow jurors. I would like to flatter myself by thinking that I only looked out for the factual soundness of the arguments they presented but I would be lying if I did not admit that I was occasionally swayed in favour of a point delivered with a warm smile or mildly irked by what I thought was a tendency to grandstand.

As a reviewer, the most challenging aspect of this piece is that it forces me to review my own performance as a juror. If yesterday is anything to go by, inwardly, I am the slow-burning maverick that surprises everybody with their nonconformist and unpopular stance, whereas outwardly, I keep my cards close to my chest, calmly and quietly presenting arguments that could alternatively furnish both a guilty and not guilty verdict. In other words, I am a weird mixture of indecision and cockiness.

So, am I, on the basis of yesterday’s evidence, equipped to make decisions of this calibre? Can I resist the cognitive obstacles that stand in the way of rational judgement? These are, as far as I am concerned, the two most important questions in a show full of important questions but I am afraid that the jury will be out on those for quite a while yet.