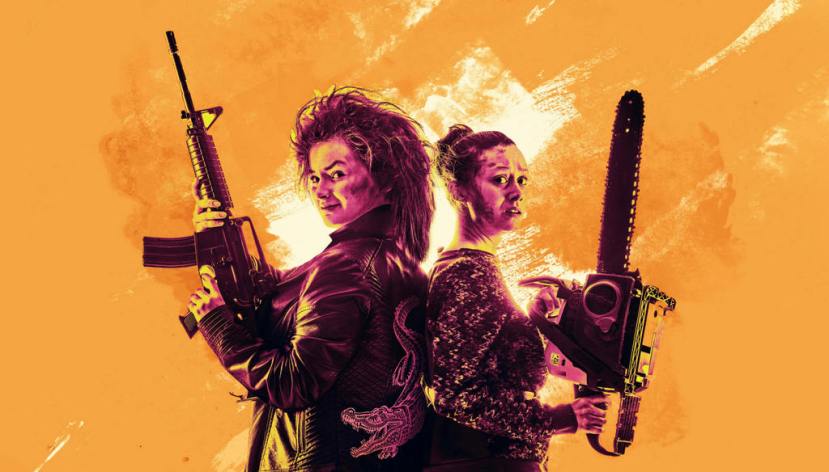 Meghan Tyler’s Crocodile Fever bursts on to the main stage at the Lyric Theatre in a riot of profanity and darkly comic abundance. It is 1989, Armagh, the height of the Troubles. Alannah (Lucianne McEvoy) is cleaning her already spotless kitchen with a toothbrush and some bleach, while her paralysed father lies upstairs, thumping the floor when he needs something. Alannah’s cleaning is interrupted by the arrival of her rebel sister Fianna (Lisa Dwyer-Hogg) who hasn’t been home in 11 years. Fianna has been in prison, for a crime committed by her sister and is now working for the IRA. Sibling relations are strained, to say the least. When Fianna clambers through, the kitchen window, she brings in dirt, both literal and metaphorical, that will set in motion a series of raucous and bloody events in which the sisters wreak revenge on their abusive father (Sean Kearns).

As with any Irish drama featuring siblings, violence and strong language, there are obvious references here to Martin McDonagh, right down to the religious iconography and the Tayto crisps. However, Tyler has a different sensibility, more horror film than Grimm’s fairy tale, and she channels classic movies like The Shining and Carrie to explore characters who are fighting monsters of a different, much more human kind.

Like Carrie, the play is a tortured shout of female rage, but instead of using the Troubles setting to create a worthy rural family drama, Crocodile Fever embraces explosive comedy and growing surrealism to drive home its message.

Lucianne McEvoy and Lisa Dwyer-Hogg are in their element with the exuberant script. McEvoy excels as the uptight sister who needs order and certainty to cope with the daily grind of her life. As the drink, and then the blood flows, she relishes the mania and commits to the growing sense of surrealism. Her speech about misunderstanding the lyrics of Toto’s classic song Africa is worth the ticket price alone. Lisa Dwyer-Hogg has the showier role as the profane and punkish Fianna, but she is smart enough to show the vulnerability of her character underneath the hard exterior.

Gareth Nicholl’s production is heightened and cartoonish, played out on Grace Smart’s chintzy, realistic set, which features a shrine to the girls lost mother. The direction embraces the manic nature of the action but at times, it could contain the chaos better. The production is loud and high-octane from the beginning and some quieter moments at the start would give the play and the actors a more nuanced journey. The violence is mostly played for laughs, which fits the overall tone, but leaves deeper questions unanswered.

From the moment that Peter, the girl’s father, slithers down the stairs to meet his fate, the play shifts into a completely different gear. Nicholl builds the tension well and Sean Kearns’ realistic, almost deadpan performance adds to the surreal atmosphere that is engulfing the stage. By the end, we are in pure Ionesco territory and the audience might not be quite sure what they have let themselves in for.

The less you know about the ending before you see the show, the better, but the final coup de théȃtre is as audacious as it is surprising.

As the sisters do battle with the metaphorical beast of male dominance, the question of whether Crocodile Fever fully works or not raises its head (or opens its jaws, if you will). However, it is not often that theatre has the power to astonish anymore. Crocodile Fever does just that and is to be applauded for being brave enough to embrace the fantastical. Crocodile Fever is a brash and fearless play that stays true to itself throughout and the only thing to do is to sit back and relish the mayhem!