Once Upon a Time… in Hollywood – Film Review 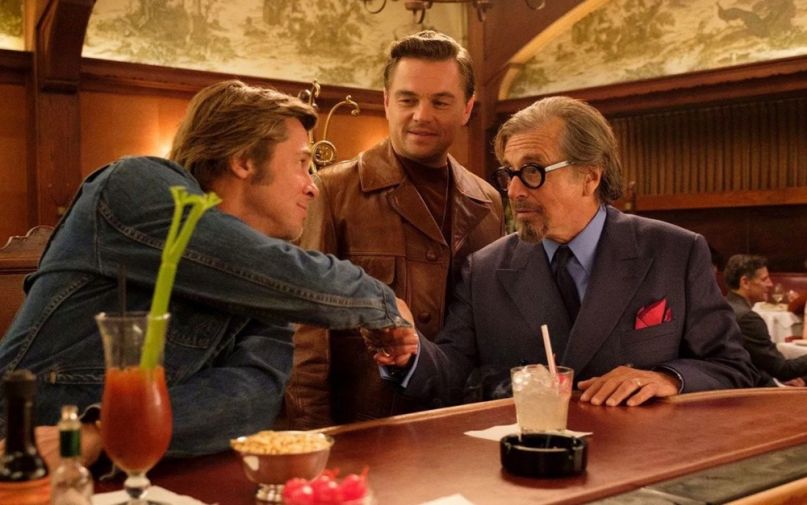 Once Upon a Time… in Hollywood – Film Review

Once Upon a Time… In Hollywood tells the story of two friends in 1969. Rick Dalton (Leonardo DiCaprio) is a TV cowboy who is struggling to make the break into the big time and work in movies. His long-time friend and stunt man Cliff Booth (Brad Pitt) also doubles as Rick’s driver and general handy man. The film tells the story of the two men as they try to survive in Hollywood and also encounter members of the Manson family.

The film also has various other strands, as the pair meet a multitude of Hollywood producers and directors, both real and from the mind of Tarantino! Some of the other strands disappear as quickly as they start, whereas others are more developed. There are also a multitude of guest appearance. We meet names such as Bruce Lee (Mike Moh), Steve McQueen (Damian Lewis) and Roman Polanski (Rafal Zawierucha) to add some Hollywood glamour to proceedings. There are also some major actors playing very minor parts, as everyone wants to work with ‘the great Tarantino’. Names such as Dakota Fanning (Squeaky Fromme), Luke Perry (Wayne Maunder), Lena Dunham (Gypsy) and even Al Pacino (Marvin Schwarz) turn up in quite minor roles. Bruce Dern plays George Spahn in a role that was originally intended for Burt Reynolds, who unfortunately died before the role could be filmed. It is often unclear whether these characters existed in real life, as Tarantino continues to weave reality with the products of his imagination.

Margot Robbie plays Sharon Tate as a wide-eyed innocent who seems delighted with her initial steps to make it as an actress in Hollywood. At the time the film is set she had recently released The Wrecking Crew which starred Dean Martin. Sharon was known for her appearance in the Valley of the Dolls but to this generation is mainly known for her marriage to Roman Polanski (who had recently released Rosemary’s Baby) and due to her murder by members of Charles Manson’s “family”.

The film does bear a comparison with Inglourious Basterds, and is a strange meeting of fact and fiction. The main draw back with this film is its running time, at just under three hours. There are certainly many interesting ideas and good scenes in the film, but there are also many that meander and should really have ended up on the cutting room floor. There has also been talk of an Oscar nomination for Brad Pitt’s performance, which once more seems strange as he does little more than drive around town with a smug grin on his face. Really, most people will have already decided if they’re going to see this film, and the hype will be too much for others to resist! It’s nowhere near Tarantino’s best film, but there are so many talking points about the film, that it’s impossible to ignore. Tarantino has managed to capture the glamour of Hollywood, but also the emptiness at its core.