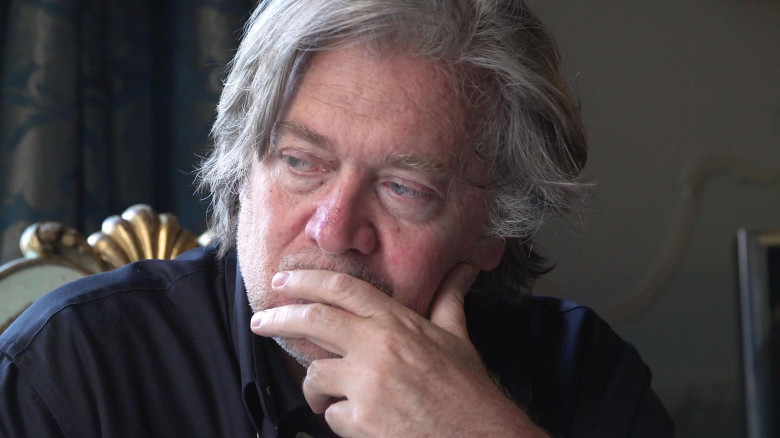 This is a documentary about Steve Bannon, the creator of Alt-Breit, the US news agency which propagates the views of the far right. He no longer runs it nor is he any longer a part of the Trump administration but he is not shy in proclaiming that it was his strategies that won the White House for Trump. This is a fly on the wall documentary of Steve Bannon after he left the White House up to and including the midterm elections in November 2018. In other words, this is recent history.

Whatever one thinks of his political views, Bannon has a crude charisma. He is impossible to ignore and has a powerful presence. His words and the accompanying ideas need to be looked at with care. As in the moment when a heckler is being manhandled out of one of his meetings, he proclaims that he believes in freedom of speech ‘but outside’, as the female protester vainly shouts as she is being ejected. In many ways that was the leitmotif of the documentary, the belief in an uncontroversial right but then placing a gloss on it. There is not much value in freedom of speech if those in power ensure that the voice cannot be heard.

The presence of burly security guards may be reassuring for Bannon and those who choose to seek his counsel. But for a curious bystander they look more like a private militia. Given that Bannon believes that the emotion of hate is a powerful one that can be harnessed for electoral purposes these guards take on a potentially more sinister dimension.

Perhaps the most worrying of Bannon’s entourage was one John Thornton. Urbane and suave, an ex-Goldman Sachs banker. On the surface he seemed at some remove from the other supporters. But in the footage that Kayman included he appears to be a total believer in Bannon. What the documentary does not make clear is what Bannon does believe in. He wants to tear down the current ‘elites’ but does not precisely state who they are. He is in favour of the white, working class man but how in practical terms he aims to help him is not so clear.

Although watching Bannon is not a pleasant experience, he and his camp followers like Nigel Farage have at the moment a definite hold on the electorate. It behoves everyone to try to understand what that hold is and then work out how to counter it. It may be wise to watch the film a second time with cool detachment.