I / Thou – Dublin Dance Festival – Review 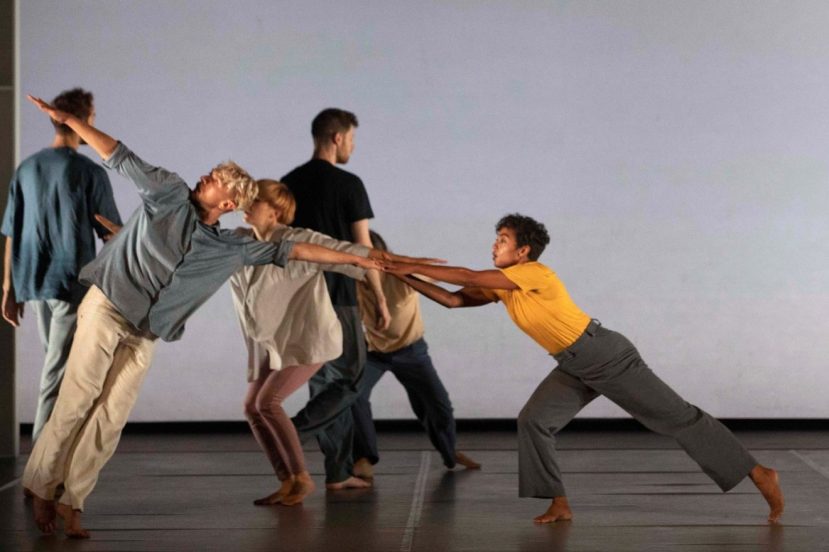 I / Thou – Dublin Dance Festival – Review

The piece opens with a dark and brooding image, as the dancers interact with lengths of cable that are tied from low down on one side of the stage to high in the rafters on the other. The performers have their faces covered with cloth and tie themselves in amongst the cables, like insects caught in a spiders’ web. Later, the cables are released to let the dancers have full movement throughout the stage.

This is a new work by the Liz Roche Company. The production is inspired by the work of visual artist Brian O’Doherty/ Patrick Ireland, and in particular his piece yellow I/ Thou which is part of his One, Here, Now: The Ogham Cycle, a nine-part series of murals at the Sirius Arts Centre in Cobh. The production was commissioned by the Cork Opera House in partnership with Sirius Arts Centre. It is described as an “artistic dialogue” between Brian O’Doherty and Liz Roche. The two artists working in different fields exchanged an email correspondence in which O’Doherty described his work as “A speedy little vision, like a living brushstroke… a movement, an action against the rigorous plan of the rest… fanciful, perhaps but true”.

The other major player in this piece is composer Linda Buckley who was commissioned to write the score. The music is largely pre-recorded but there is a live element with Kate Ellis on Cello. The score is varied and wide ranging, featuring singers Suzanne Savage and Robbie Blake. It creates a haunting and moody soundtrack with quite an ethereal feel that works very well for the performance.

The production has a set by Joe Vanek which is reminiscent of the mural by O’Doherty, taking shapes and ideas from the art work. The lighting also plays a key part, as lighting designer Stephen Dodd has a multitude of light sources to play with, with spot lights on either side of the stage as well as above. It creates interesting atmospheres, playing with light and shadows on the stage.

Quite how the dance piece relates to the mural is difficult to discern. The painting itself is an abstract piece, as is much of O’Doherty’s work and the production is more a reaction to the mood or emotions created in the mind of the choreographer, Liz Roche. For some the lack of a narrative or structure to frame the production around will make it difficult to digest, but really the performance should be enough in itself. In our recent interview, Liz talked of choreographers who have liberated themselves from the requirement for a narrative and that their “work still communicates in a most profound way to their audiences. I think choreographers have to be brave, but for it to work, audiences have to try and meet them as best as they can”. In this work, six dancers perform a series of intricate and diverging pieces to a moving and quite lovely score. What more can an audience ask for.