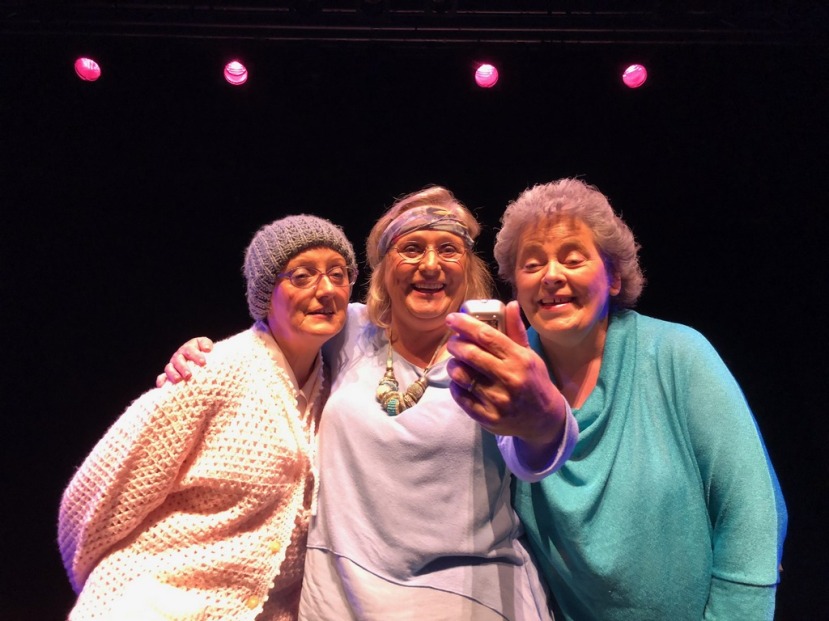 Tommy Marren is the writer and director of 3 Hail Mary’s which opens at the Olympia Theatre on May 9th. Letizia Delmastro talked to him about his inspiration for the work and the journey from page to stage.

So Tommy, what inspired you to write “3 Hail Mary’s”?

Well, I always wanted to write a play set in a nursing home that had a comedy context to it, but the problem in treating this kind of subject is that you’d have to very careful and sensitive, and acknowledge that nursing homes are not always places people would want to stay in. So, while I was thinking about how to treat the subject; I was taken by a campaign launched by the HSE last year called “Understand Together”, which was trying to open up the subject of dementia and memory loss to a wider audience and make it less a taboo subject as it appears to be. From there came the idea to write a play set in a nursing home, based on the three Mary’s, all suffering from different stages of dementia, making it into a comedy and at the same time making sure it was sensitive to people currently suffering from the illness.

The three main roles are of older women, who usually don’t get much room on Irish stages.  Was that something that influenced you in the writing of the play?

Yes, to a degree. I agree wholeheartedly that there are very few strong female leads in most of the Irish plays that are around at the moment, and I felt that, even though there are some male roles in the play, the story would come through in a better way if told from a female perspective, all telling their life story through monologues.

You mentioned the idea of wanting to create a more open dialogue about dementia, so what do you think the audiences will take away from the show about it?

The play is designed to bring the audience on a rollercoaster of emotions, as they follow the three women chatting and recounting their life stories, all polluted from the dementia, through their last day together. The audiences have been all very heterogeneous, with younger and older people, nurses, carers and people in nursing homes themselves, and many people have come up to us after a show saying how they have gained a different perspective on dementia and nursing homes, and feel more free in talking about their personal experiences with the disease. Even younger audiences come out of the show saying how this is something we need to talk more about. The song I wrote for the end of the show “I am really still the same” shows how we need to change the way we see dementia, not the way we relate to the victim.

Do you think using comedy makes the audiences more comfortable with talking about this subject, rather than drama?

Absolutely. I think that if I had set the storyline on a more serious pitch it wouldn’t have had the same effect at all.

Changing the subject a bit: you are obviously not new to playwriting, but how did it feel to go from page to stage?

I wrote and directed the play, and I’m also playing a role in it. You might say I’m breaking all the big NOs of theatre, but writing something that has such a big resonance and effect on audiences I felt I had to be involved in the whole creative process. I feel like this play would have worldwide resonance and could be related to by people in Ireland as well as people of other cultures!

Do you think the play changed at all during the rehearsal process?

It certainly did. I hadn’t planned for the ending to be sad, but during the rehearsals for the final scene the three Mary’s started genuinely crying themselves, which turned it into an incredibly inspiring scene. Things have also been tweaked here and there since we started touring, but we’re generally sticking to the original script.

You have already had a full tour of Ireland, and a few dates in England. Where else will the tour be taking you?

We will be performing in Roscommon and Sligo after the run in Dublin, then taking the summer off, as we all are amateurs, with full time jobs as well. The tour has been a great success so far, selling out all nights to date and with venues asking us to come back, so this Autumn we will be starting a full tour of Ireland again with “3 Hail Mary’s”.

Your Irish tour includes both big and small towns. Do you think it’s important to bring the play to more rural areas where people wouldn’t have as much access to theatre?

Absolutely. This very weekend we are performing in Kilmaine, a very small community in Co. Mayo, in their Town Hall. Some of these communities are somewhat starved of culture and theatre, simply because there aren’t enough professional companies willing to go out to local communities. There are a number of community centres I always bring my plays to as a show of gratitude, for when I started out as a playwright and my name wasn’t known yet, they were the only places where my plays would be put on.

Lastly, “3 hail Mary’s” is opening on May 9th in the Olympia Theatre in Dublin, are you looking forward to it?

I am. Sometimes being a group of performers that come from the rural side of Ireland, it can be strange coming to Dublin, with the big audiences, reviewers, etc…but my argument always is that a play is what it is and you either like it or don’t. I don’t believe the audience’s reactions in Dublin will be any different to the others around the country, so I’m going to the Olympia being confident that the play will be a great success and will have huge reactions from the audience.