“With eleven years as an Edinburgh Fringe must-see phenomenon, a BBC Radio 4 series, a critically acclaimed West End run and an Olivier Award to their name, The Showstoppers have delighted audiences across the globe with their ingenious blend of comedy, musical theatre and spontaneity.”

So where did the inspiration come from to do an improvised musical?

It all started eleven years ago, when director Adam Meggido and Dylan Emery were working with actor Ken Campbell, who would sometimes ask them to do “the next scene as if they were in a musical”; it’s by playing around with that in rehearsal rooms that they discovered the potential of creating a musical out of nothing. They hired some actors and a space in London for a week and scheduled a performance at the end of that week. They spent that week developing skills for improvising a musical and at the end of the time the performance was done, and there was enough in it for them to start doing it as a running show and that is still being performed, eleven years later. 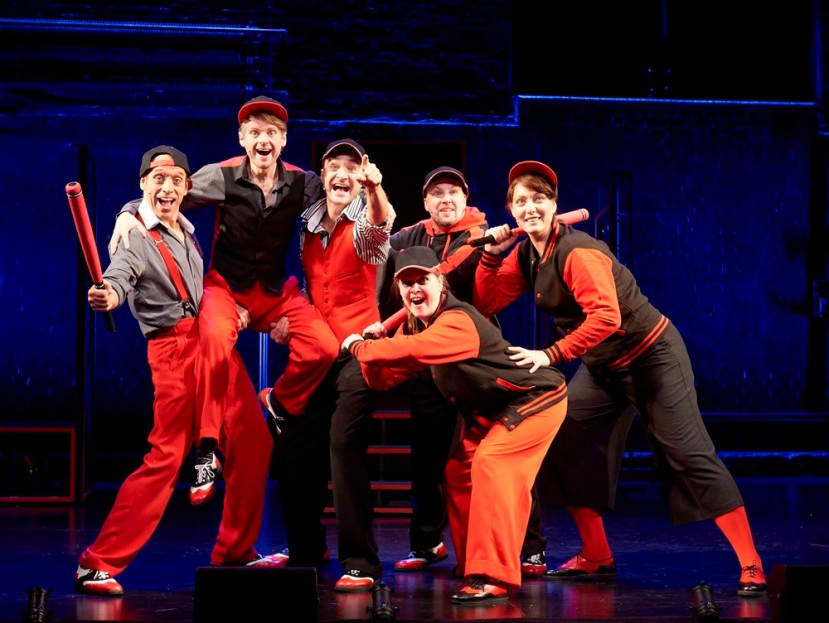 The improvisation most audiences are used to is usually the one where actors take on a suggestion and act on it; how does this fit in with improvising music, lyrics and dances to make it into a musical?

Our show is completely improvised, and I like comparing it to a trifle, where all the ingredients have to come together to make it taste sweet; so we just layer it up with all the different skill sets in the rehearsal room, we break them apart and practice them separately, then try and bring it all together on stage to make a tasty dessert.

Every night is a leap of faith, never knowing what the audience is going to suggest. How do you prepare to be open to anything that might be thrown at you?

Yes, we need to be completely open-minded. As long as we are all working in agreement, which is the basic foundation principle of what we do, we just have to make sure that anything that is offered during a scene or a song is accepted and, by working with the other performers, we develop it. We also rely on the audience, and not just for prompts; they guide us with their reactions to what we offer in our scenes: they are our boss for the night, deciding where the story will go. This means that every show is unique, and people come back for a different experience every night…we recently gave an award to an audience member who has seen our show for 100 times!

Audiences can be quite wild in their suggestions. Are there any prompts you would refuse?

We usually find that audiences tend to self-censor, these days. If an audience member as a joke suggests something particularly off-colour, we have found that the rest of the audience will respond to that and give us our answer. We don’t have to do much in matter of censorship, as we are responding to what the energy in the room is. That is really what our show is about, creating something that can only happen on that night, with that audience right there, and we are their servants, as we do what they want us to do.

You have toured around the UK and Europe. Do you find that audiences from different areas tend to suggest different topics?

Yes. The suggestions within cities are usually more mixed, but when touring different regions we usually find that people want the show to be a joyful celebration of where they are, and therefore want the show to be set there. The fun also comes from us not really knowing their setting very well, so we will play a sort of assumed version of it, usually getting it wrong. There is a certain joy in us not knowing all their references, and the audience loves seeing something that they know being brought to life in a clownish way.

Everything is improvised: do you find not having to work on a storyline or character before going on stage to be freeing?

Absolutely! This is one on the beautiful things about improvisations, being able to build characters and story lines retrospectively, not knowing the full story until the curtain falls. During the show, we take every moment as an opportunity to create something new: this makes us make the most exciting and bold decisions to bring the story forward, and being given the agency to do that is a proper gift!

You also run a show for kids, The Showstopper’s Kids’ Show. How do you find a younger audience compares to an older one?

Yes. Kids are not as impressed by the performance element of improvisation as adults are, but what they really enjoy is telling grown-ups to do stupid things! We give the kids more steerage of the story than we do with adults: every choice is left to them, and they truly take us in amazing directions. We have found that the key to entertaining kids is to never patronize them and to respect their ideas. They live in a world where they are constantly told what to do and how to conform to the structure of society, so we present to them a world where any idea they present is taken on board.

Going back to the musical aspect of the show: you ask the audience what style of music they would like you to use. That must require an extensive knowledge about music!

We have a list of about three hundred musicals that we often listen to and try and absorb as much as possible from them. This research all happens in the background so during the show we can allow ourselves to just tap into our subconscious and let that influence our work!