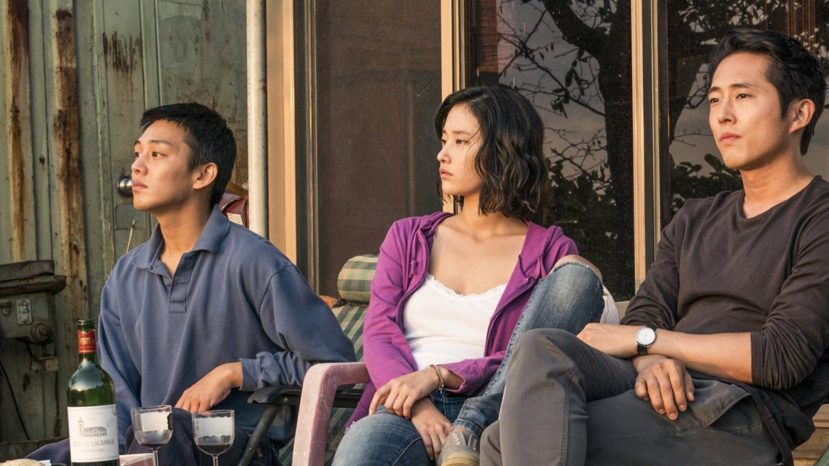 This is the first feature film made by Korean director Chang-dong Lee in almost eight years and it has been widely praised by the critics following its showing in the Cannes Film Festival in 2018. Based on the short story “Barn Burning” by Haruki Murakami it comes with a description that it is both a mystery and a drama.

It has three principal characters Lee Jong-su (Ah-in Yoo) a young man who meets by chance Shin-hae Mi (Jong-seo Jun) a childhood friend. They more than reconnect but she goes off on a trip to Africa asking Lee Jong-su to look after her cat. He does even though the cat is never seen! She returns but upsettingly for Lee Jong-su, she arrives back with Ben (Steven Yuen), a mysterious rich guy in tow, whom she met on the trip. They appear to have become an item. Ben drives a Porsche and has a very smart apartment. Lee Jong-su drives a beat up truck. He is wary of Ben and ill at ease in his company.

The entire film has an unsettling quality from the first scenes in which Shin-hae Mi appears overly made up. She must have been the creation of a beauty parlour. Similarly, the apartment of Ben is such a cool pad that an interior decorator with a substantial budget has to have been responsible for its smartness.The visits by Lee Jong-su to his father into the country stand in contrast where manufactured facial beauty and glam interiors would be inconceivable. The film straddles different worlds.

Chang-Dong Lee moves the not-easy-to-follow story forward slowly. The film lasts almost two and a half hours with innumerable changes of scene which adds to the challenge of comprehending what precisely the characters are about. At all times the cinematography is impressive but it does not often help to reveal the story. The film is indeed a mystery with the drama held in restraint.