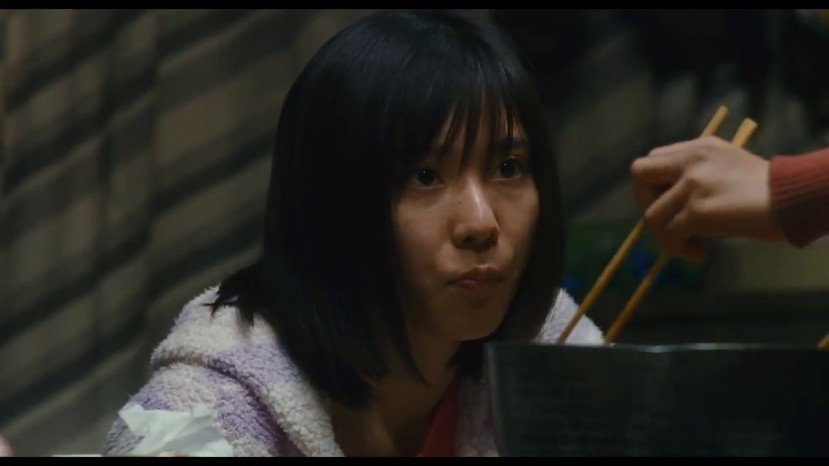 The Shibata family eke out their existence on the geographical and economic edges of Tokyo. The family appears to consist of a father figure Osamu Shibata (Lily Franky), a pre-adolescent son Shota (Kairi Jyo), a daughter Aki (Mayu Matsuoka), a wife Nobouyu (Sakuru Ando) and Hatsue (Kirin Kiki) a granny on whose social welfare they all apparently live, but they do not. Each is involved in various illicit ways of making money on the side; most prominently shoplifting. The opening scene shows how skilled the father Osamu is in this activity as he directs Shota in the superficial shininess of a supermarket how to lift what is needed by the family. Nothing is left to chance. It is a well-crafted activity which is reminiscent of Dickens’ Fagin in Oliver Twist.

To this community is added a young female waif Uri (Miyu Sasaki), who appears to belong to an abusive family,  who they come across on a miserable night on their way home from a “shopping spree”. Subsequently they see on television, police appeals asking for information about the whereabouts of Uri.

However, this family cannot continue to exist entirely separately from the authorities. Gradually the secrets of the family come to be revealed. Notwithstanding the amorality of each of the characters in relation to the property of others, each of them have many positive features which make them endearing. Affection between them is the emotion they show as they go about their daily lives.

Lily Franky is utterly engaging as the father. Somehow he manages to bestow on his anti-social behaviour a benign quality. It is that same quality which permeates each of the performances by a cast which is absolutely in harmony with what is being portrayed. That is the magic quality that Koreeda brings to this tale which investigates what is a family and how a family on the economic margins can exist on the periphery of a contemporary urban wasteland. His observation is acute and the cinematography shows the hand of a master at his craft.

Koreeda from this marginal material has created a film which has received any number of accolades on the film festival circuit. It is a complex observation of consumer society as it is today. It operates on many levels and rewards reflecting on its themes and images.