Sandra (Karen Ardiff) has just arrived in the house she grew up in. It is a house with a lot of memories for her, but she has a new life in London and is thinking of selling it. She has come to stay there, along with her husband Ray (Enda Oates), and plans to meet the local estate agent to discuss the potential sale. The estate agent, Linda (Janet Moran), is an old school friend but when she comes to view the property, she brings her husband Eddie (Charlie Bonner) along with her. As soon as Sandra sees Eddie she realises they have a shared history together of one troubled night on the Rathmines Road.

This is a new co-production between Fishamble and the Abbey theatre. The play is written by Deirdre Kinahan, who is probably best known for Halcyon Days but already has a considerable back catalogue of work to her name. Fishamble has already produced one of Kinahan’s plays in the form of the highly successful Spinning which was part of the Dublin Theatre Festival in 2014.

The set by Maree Kearns depicts the front room of the house where Sandra grew up. It is stripped of most of its furniture and has seen better days. There is an air of damp in the room and it could do with some love.

An unusual feature of this production is the inclusion of a trans character in the form of Dairne (Rebecca Root) who was once known as David and was a childhood friend of Sandra. The characters have a long history together but have drifted apart in recent years. Dairne is a wild card in the pack and a source of much of the humour in the early part of the play. It is definitely a positive to see more diversity on the Abbey stage and it did add some depth to what would have been a very traditional minor character otherwise.

The cast do well with this complex work. It is a play of strong emotions and there is much anger and grief displayed on stage. Karen Ardiff has a particularly difficult part as Sandra, a woman who is confronted with a ghost from her past. It is hard to say how any person would process these emotions but her mix of shock and inner turmoil are believable. Enda Oates does particularly well as Ray, Sandra’s husband, who initially struggles to believe his wife that she has this skeleton in her closet for so many years.

The play deals with the difficult topic of sexual assault and rape. The event happened a long time in the past, but the main character Sandra still struggles to deal with its consequences. It is difficult to resolve a theme such as this in a short period on stage and a few devices are used to solve this issue, which work relatively well. The events lead to a maelstrom of emotions and it is quite powerful at times. Don’t expect an easy night at the theatre but it is important that issues such as this are played out on our stages, challenging the status quo and reflecting our society. 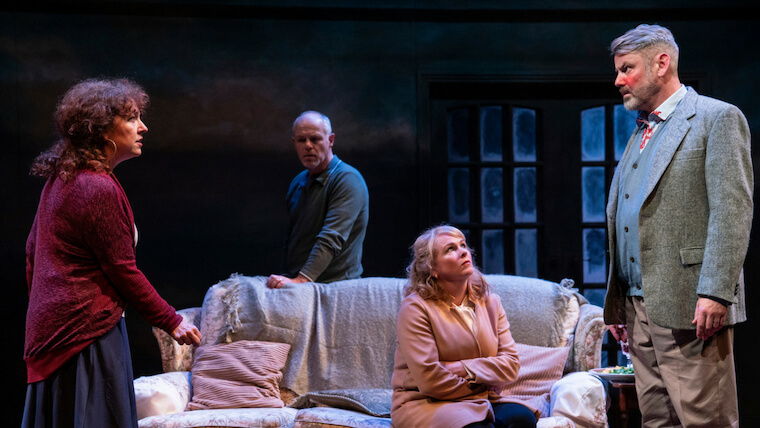