In 1965, Gloria Szymanski was a young woman in her early thirties. A recent divorcee with a young child, she worked as a waitress to make ends meet. It was at this point she agreed to make an unusual film. She met with three famous Psychotherapists and discussed her problems. These therapists had a variety of different approaches. All three of these sessions were recorded and the resulting film was called ‘Three Approaches to Psychotherapy‘ but later became known as the Gloria Films. The film was meant to be used for educational purposes but instead received a general release and was screened in cinemas around the United States. In a sense, Gloria had become a star and her sessions became the first insight many people had into psychotherapy.

Writer and performer Gina Moxley explores these tapes in this work. This new production is a re-enactment of some sections of the film, with Gina playing the therapists with a wild and irreverent edge and Liv O’Donoghue playing Gloria. The production also includes a wider discussion on female sexuality. The final piece of the puzzle is a musical element, as Zoe Ní Riordáin performs a series of electric guitar driven musical interludes live on stage.

Gina introduces each of the sessions by giving us a short insight into the therapist while discussing their penises! In her programme notes she describes the first therapist as parental, the second as aggressive and the third as predatory! With a modern view of these tapes, which are now over 50 years old, they feel dated. Their attitudes seem misogynistic and are therefore an easy target for Gina’s caustic wit. Gina also shares many of her own experiences. She tells of the times she was unwillingly introduced to the male sexual organ, in a variety of settings and locations. She talks of how the attitude to sex in Ireland has changed fundamentally over the course of her life while passing the torch on to a new generation of feminists.

Liv O’Donoghue is enjoyable as the earnest and candid Gloria. She is a young woman who despite her obvious beauty and charm, lacks confidence of her place in a male-dominatedd world.  Gina Moxley comes across as a Machiavellian chat show host, fast-talking and sassy. She opens the night by asking ‘can you see me’, immediately breaking the fourth wall and demanding an answer from the audience, but also making a wider point. As a woman of a certain age, you are said to become invisible and Gina proves to be just the opposite, impossible to ignore! This is a rich and humorous piece that engages on many levels, showing clearly how attitudes and ideas have changed towards women, but also that the battle has only just begun! 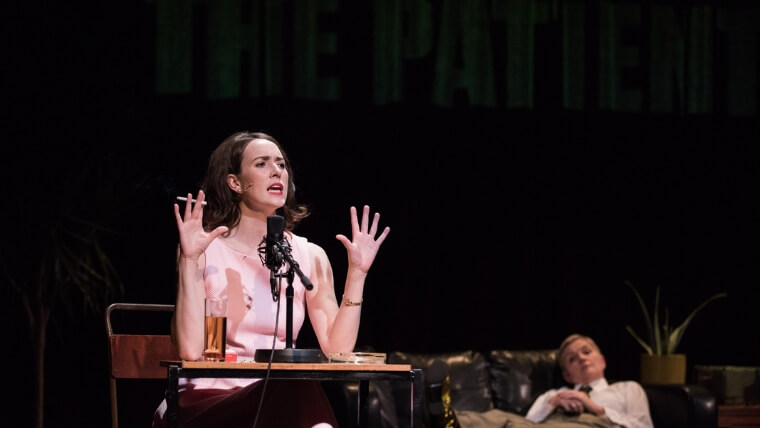