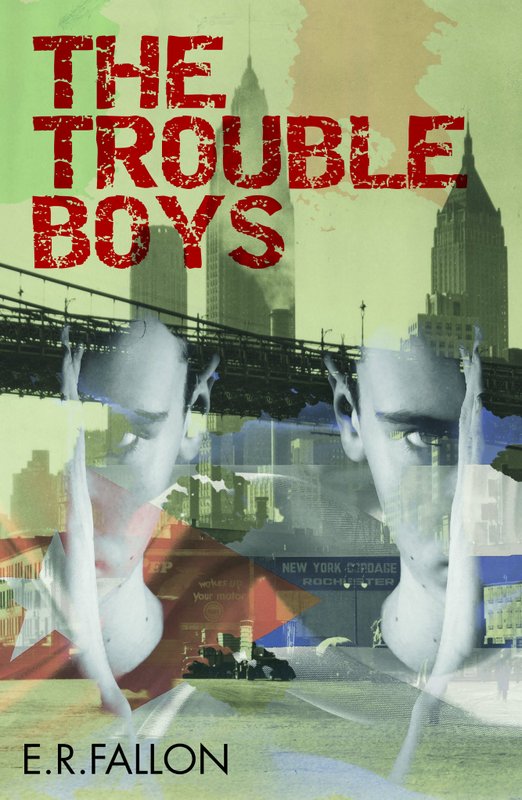 Set mainly in the Bowery, New York, a district described by President Teddy Roosevelt as “a highway of seething life, of varied interest, of fun, of work, of sordid and terrible tragedy; and it is haunted by demons as evil as any that stalk through the pages of (Dante’s) Inferno” Fallon’s book tells the story of an Irish immigrant family who try to make a life there in the1930s. Leaving Ireland as an eight year-old boy, Colin O’Brien, the youngest son of the family, finds on arrival that his destination is very different from what he had imagined. Instead of the cowboys and big house he had dreamt of, his new home turns out to be a run-down apartment in an area dominated by criminal gangs and quickly he finds himself drawn into a nightmare from which he will spend the rest of his life trying to escape.

E. R. Fallon is the author of “Finding Him Again” which she describes as “a small-town romance” and a number of crime thrillers. The Trouble Boys is her first historical crime novel. It starts in 1935 when Colin arrives in New York and finds that, in order to survive, he must either fight or submit. His meeting with a young Cuban-American boy, Johnny Garcia, is both an education and a support as Colin tries to understand this new world, at the same time coping with his dysfunctional home life, an alcoholic mother and a distant, morose father. The New York she describes is a grim place, full of constant danger and upheaval and in the first few chapters Colin’s family is faced with episodes of shootings, child abuse, suicide, rape and finally a gruesome murder. Fallon does not belong to the school of writing where less is more.

Later, Colin, now in his twenties, is put under pressure to join one of the Irish mafia-type gangs who control the district. This brings him into conflict with his old friend, Johnny, now a member of a Cuban gang with similar aims. The ensuing feud and the complications of Colin’s personal life lead to a dramatic finale.

Fallon has chosen an original and unusual setting as the backdrop for her story. “Peaky Blinders” showed us the exploits of the Irish Mafia in the UK but there has been little published about the Irish Mob in the USA. Her detached writing style, however, fails to give us a real insight into her characters. She tells us about them, she describes what they do but it is sometimes hard to believe in them. This is not helped by the forced and clichéd dialogue we encounter from time to time. A ten year old Colin tells his Cuban friend that he looks “like coffee with milk” and later when he meets the widow of a man he had murdered she tells him that he “had some nerve” killing her husband.

The Trouble Boys spans the same time line as Mario Puzo’s The Godfather. While the world it describes is less glamorous and its characters are less iconic, it is interesting to explore a different aspect of that gangland scene. It is published by Urbane Publications.