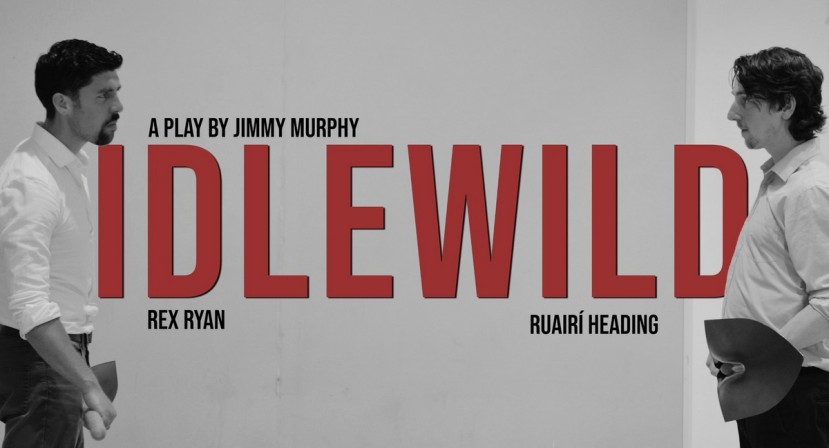 We had the chance to put some questions to Rex Ryan ahead of the opening of Idlewild next week at Smock Alley. We asked him about the show and his theatre company Glass Mask. You can see the results below…

Tell me about the ‘The Price of Lift’ season?

The Price Of Life season is Glass Mask’s debut season as residents in the beautiful Boy’s School theatre in Smock Alley. It consists of three powerful plays by the great Irish playwright Jimmy Murphy. Chosen to create theatre that speaks directly and intensely to the times we live in, we are bringing real plays to that space that should galvanise a new audience coming through those doors.

The first play is our gangland tragedy ‘ Idlewild’ starting July 29th. A story of revenge and brotherhood. The second is an intensely pertinent play named The Seamster’s Daughter, in which Jimmy explores Consent, Abortion, Family and Motherhood. The third is a revival of The Hen Night Epiphany. A 5 hander based around a fateful Hen Party where old demons are resurrected and the family system is put under the microscope.

How did you become the ‘resident theatre company’ of Smock Alley?

I had been looking for a home for Glass Mask that would give us a solid base to establish ourselves as a young company with vision and fire. I discussed this idea with Patrick Sutton (Director of Smock Alley) and then furthermore with Aisling Mooney (Director of Programming & Finance at Smock Alley). I have performed in Smock numerous times so Aisling placed her trust in me to be able to do the business with this new company.

I love the Boy’s School Theatre, of course I am biased, but it is my favourite theatre in Ireland. There is a lovely contrast of the epic and the intimate in there. I thought if I put the right people together, why couldn’t we create electric theatre in there? The deal was done and the support has been immense.

Jimmy Murphy is an ‘associate writer’ for the company? What does that mean exactly and how did the link come about?

I worked with Jimmy a long time ago on his play ‘ What’s Left of The Flag ‘; Our Glass Mask relationship came about after this in a strange act of synchronicity;

I was choosing the first few plays for Glass Mask and struggling. I wasn’t sure if I wanted to commit to an overseas playwright, I wanted a deeper connection, a closer working relationship. I shot a bullet in to the darkness with a random email to Jimmy asking him did he have anything; That very day he had finished Idlewild, which is now our first play. From this we formed a close working relationship and decided to do an entire season of his plays to launch the company. To work closely with a playwright of his calibre is a dream.

Associate writer means that he has a say in all of the future plays we choose, he will facilitate a mentorship scheme with playwrights as part of Glass Mask’s residency and he has a say in the company decisions.

How difficult is it for a new theatre company in Ireland? How do you fund your productions?

We fund our productions with tireless effort though crowd funding, private investment and personal fundraising. Orson Welles once said acting is 95% hustle and then you get to act. I accept this madness.

For a young company, it is only as difficult and as limited as your vision is. We are in this for life, so we have expectations to suit that ethos. If you love it, and are smart, you’ll find a way.

Tell me about the play ‘Idlewild’?

Idlewild is born from the recent gangland tragedy in Dublin. The play has evolved into quite an epic exploration of brotherhood, masculinity, criminality and betrayal.

The thing that separates this play from other Dublin gangster stories I’ve seen is the religious element to the play, There is something deeper at work. Two old friends meet at the grave of their fallen best friend, and decide the bloody war must end today. I play Anthony Kavenagh – A successful businessman who the papers have dubbed ‘ The Rev ‘ due to his religious beliefs and reclusive nature. There may be a live animal involved, there may be gun shots.

We preview on July 29th with Crack In The Glass- which is our project to welcome unwaged individuals and people who could not usually afford a trip to the theatre into our home.

We then run for two weeks, until Aug 11th.