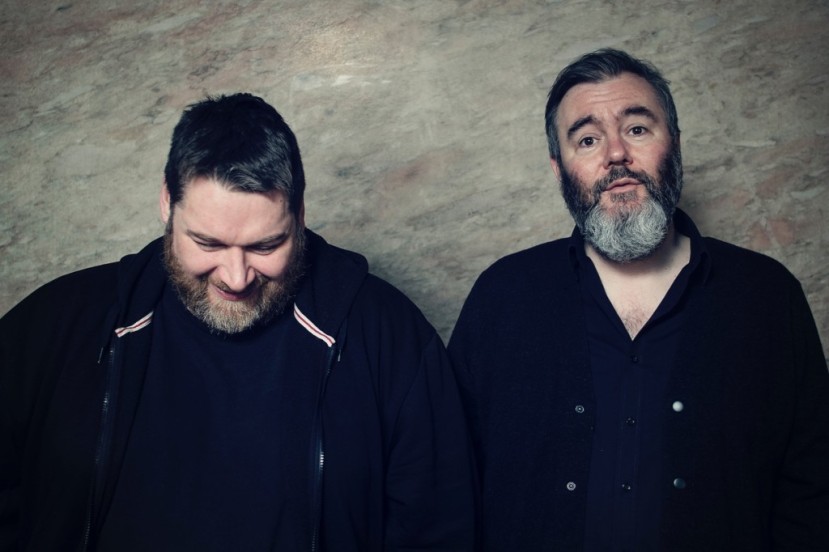 No More Workhorse had the chance to interview Aidan Moffat over email, here’s how it went:

The album is great, a highlight for both you and Hubby (RM Hubbert).  Can you tell us a bit about the background to it?

We were playing a festival together a few years ago – Hubby was headlining and I was supporting with a spoken word set, and we played our first song together, from Hubby’s second album, Car Song. I think I just very casually suggested we do an album as we drove, and it’s taken about four or five years to find a window to release it.

How does it work when you go to write songs, do you pick up an instrument or is it more of a looser process?

The songs were written individually, in that Hubby would send me guitar parts then I’d write around them and add the drums and keyboards at home. The whole album was demoed, so just about everything was written by the time we got to the studio – then Siobhan (Wilson) and John Burgess came in to add some lovely parts and flourishes to top it off.

Is music as important for you these days? Do you listen to much new music?

It’ll always be important, certainly, and I try to listen to as much as I can. It can be pretty exhausting these days, though, there’s so much of it – I tend to love an album intensely for a month or two then move on to something else. Right now it’s Tropical Fuck Storm’s A Laughing Death in Meatspace.

What about older stuff, anything that’s really stood the test of time?  Anything that passed you by previously that you’re into now?

It’s all stood the test of time! There’s not a single record I ever bought that I don’t still enjoy now. I’ve been listening to The The’s Infected album a lot recently, That’s one of the best 80’s albums there was, but there are just as many albums to discover from the past than there are in the present, aye.

You do a fair bit of collaborating, especially in recent years.  Anybody you’d really like to work with that you haven’t yet?

The dream would be Michael Nyman, I’ve loved his music since I was thirteen. And I actually have an idea to work with a singer I know and love but I don’t want to say who it is in case I jinx it. But I think it’d be pretty spectacular if I can pull it off…

Is Arab Strap put away for good now?

Arab Strap is dead again, yes, but may be resurrected in the future. We decided we didn’t want to be one of those bands that just end up trapped in a nostalgia circuit playing songs they wrote twenty-odd years ago, even though the money’s much better. So if we ever make a new record, we’ll tour again, but that’s looking less and less likely as time goes on.

How do you spend your time when not writing or playing music?

Shouting at children! I’m also an AFOL (Adult Fan of Lego) and design and build vehicles, but I keep that to myself. I’ve been thinking of uploading them to a site but I’m a bit scared. I try and read as much as I can too, I’m going through David Lynch’s new biography right now and it’s amazing.

What’s next for you?

Hubby and I are planning to keep going through to next year – we’re doing a Christmas single this year and an EP next year, and hopefully that’ll lead us into festivals and the like. I’ve got at least two solo albums gathering dust on hard drives right now, so I might self-release those while I try and finish a book of short stories I’ve been writing for far too long already.