English National Ballet commissioned Akram Khan to recreate the ballet “Giselle” whose first incarnation was by Adolphe Adam in 1841. The splendid result had its premiere in 2016 and it is now in Dublin where it is the opening production in the Dublin Dance Festival. 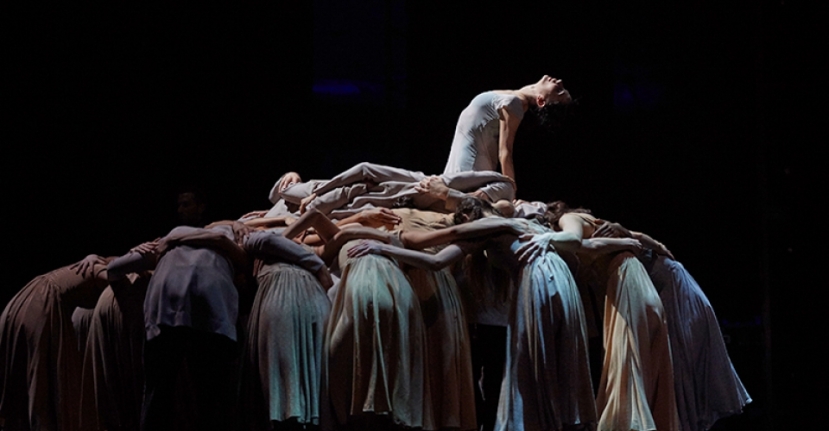 The production deals with “the marginalisation of people seeking security in places increasingly inaccessible to them behind literal and metaphorical walls”. It is the world of migrant workers, redundant workers and the economic disposable. In this instance, the Outcasts are dispossessed factory workers of whom Giselle is one. Albrecht, a Landlord, disguises himself as an outcast in order to visit Giselle whom he loves. But he has to tangle with Hilarion, who also loves her. He has “the spirit of a fox” or “a trickster” who is ‘adept at crossing the boundary between rich and poor in search of advantage”. Perhaps the Irish word ‘glic’ accurately defines him. Hilarion exposes Albrecht and meekly Albrecht returns to his world of privilege and to his cold and dour fiancée Bathilde. Giselle as a result is completely lost and expires. In the second Act the action takes place in redundant factory “one of globalisation proliferating mausoleums”. It is haunted by the ghosts of its dead female workers “the Willis”. They are armed with bamboos which are both weapons but more importantly represent a pre-industrial past where hand looms and skilled craftsmanship were revered. Their leader Myrtha summons the spirit of Giselle to join with them. It is into this world Albrecht returns to search for Giselle as he now too has become an outcast from the Landlords.

The staging is magnificent, dominated by a gargantuan wall which rotates horizontally, when occasionally, required to do so to stunning effect. The colours of the Outcasts are faded browns and greys and washed out blues. It starts with forty of them breaking their backs pushing at the impenetrable wall and they occupy the stage in the first Act with a series of breathtaking, elaborate routines. When the Landlords appear they move statuesquely dressed in attire which is so contrived and elaborate as to be risible but made from the sweat and labour of the female Outcast workers. The Landlords’ superficial magnificence however looks precarious and vulnerable and needs the safety of the wall to protect their privileges. Their appearance stands in stark contrast to the Willis, an extraordinary army of women, who wear the muted colours of the Outcasts from whence they came.

James Streeter dances the part of Albrecht. He is a handsome Anglo Saxon of some size while Erina Takahashi, who is Japanese, performs the part of Giselle is in contrast unimaginably slight. Physically they are poles apart but together they danced as one. Expressions such as ‘hand in glove’ spring to mind. In the second Act their duet was ethereal. The programme reveals that they are in fact husband and wife in real  life which is not surprising when they are seen dancing.

Oscar Chacon is a Colombian and his flashing, silver-quick movements made him fleeting, dangerous and enthralling. Myrtha, the Queen of the Willis was danced by Stina Quagebeur who with her army of Willis was “en pointe” for a very large part of the second Act. It was astounding to watch. She was all powerful and imperious as she controlled her female army.

From the beginning the music composed by Vincenzo Lamagna, using some elements from Adolphe Adams original score, created a haunting and beguiling score which was triumphantly performed by the RTE Concert Orchestra under Gavin Sutherland the music director of the English National Ballet.

It was a night to remember and the Bord Gáis Energy Theatre along with the Dublin Dance Festival deserve many plaudits for bringing this contemporary masterpiece to Dublin.