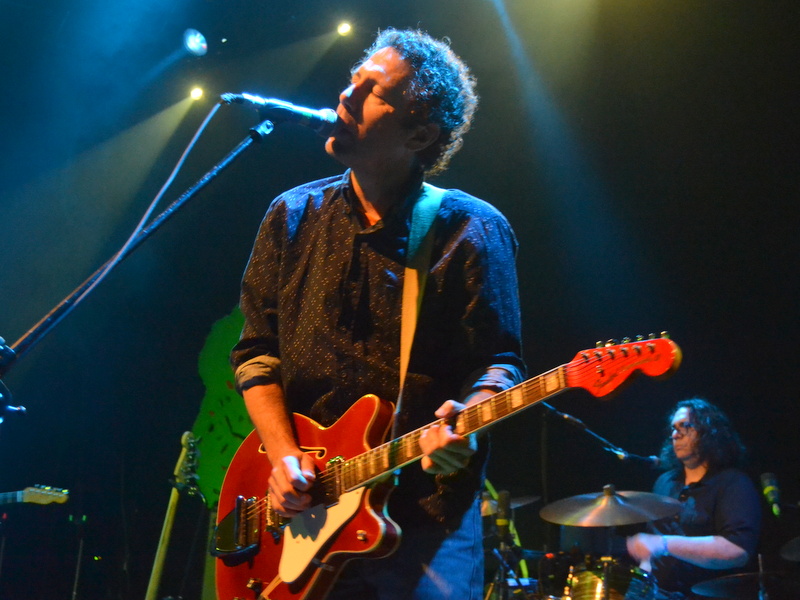 The Olympia is a relatively large venue for Yo La Tengo.  Although around more than 30 years, they never had that ‘breakthrough song’, or any kind of real heyday but have remained staunchly underground.

Instead of a support band, Yo La Tengo played two sets.  The first was drawn largely from recent album There’s A Riot Going On, which meant the set leant more on the mellow side of their huge back catalogue.  But for this band, mellow means loud.  A powerful drone introduced You Are Here, Forever amongst others.  The soft stylings of The Hour Grows Late was an early highlight, showing what wonderfully precise musicians the trio are, with every note mattering and fine harmonies.  While Ira Kaplan, Georgia Hubley and James McNew stuck mainly to guitar, drums and bass respectively, they each had a go on organ and guitar.  Rounding out the first set with Here You Are, they concluded with a lengthy droning outtro.

For the second set, the band upped the ante again.  The heavy, rocking Sonic Youth-style workout Flying Lesson saw the first of many guitar freakouts by Kaplan where he viscerally mauled his instrument, coaxing glorious noise from it.  A heavy version of Big Day Coming saw him do the same to the organ before smashing one of the decorative discs that formed part of the set!  Sensitive versions of I’ll Be Around and I Feel Like Going Home showed the band as more than just about skronky noise.  McNew got to sing Stockholm Syndrome and the biggest reaction of the night was for the oddly catchy Autumn Sweater.  The set ended with a long drawn-out instrumental I Heard You Looking, which featured Kaplan at his most unhinged on guitar, brewing up a fearsome racket, with McNew and Hubley just about keeping it together on rhythm section.

By comparison, the encore was subdued, finishing with Georgia Hubley singing a stripped down version of Tom Courtenay.  The night was an absolute triumph, with three excellent musicians who don’t make any concessions to pleasing the crowd.  They simply do what they feel like doing, which pleased most in the audience.

Set 1:
You Are Here
Forever
The Hour Grows Late
She May, She Might
Ashes
I’ll Be Around
One PM Again
Out of the Pool
Here You Are

Set 2:
Dream Dream Away
Flying Lesson (Hot Chicken #1)
Stockholm Syndrome
Shades of Blue
For You Too
Autumn Sweater
Big Day Coming
Nothing to Hide
Decora
I Heard You Looking