Moving on a decade, Paul Howard’s latest excursion into the world of his alter ego, Ross O’Carroll-Kelly, is set in 2029 with his hero still working for the notorious estate agency; Hook, Lyon and Sinker. The curtain rises on Ross standing outside an abandoned, dilapidated property in Sallynoggin, the latest bijou residence he is trying to sell, where he interprets for the audience some of his company’s sales jargon. ”Compact” we are told means you have to sit in the next room to watch TV, “charming” is just plain ugly, while “retains much of its original character” is another way of saying we couldn’t get all of the blood out of the carpet. We can tell straight away that while time may have moved on, Rosser’s roguery endures!

Ross’s reaction to his daughter’s marriage and his convoluted attempts to sabotage the wedding form the core of Rory Nolan’s one-man show. This is the fourth time Nolan has taken on the role of Ross and it is impossible to imagine anyone else in the part. He exudes callous machismo and captures the brainless posturing and labyrinthine self-validating logic of his character, never failing, all the time, to be very, very funny. Timing and delivery are perfect and the standing ovation he received was richly deserved. 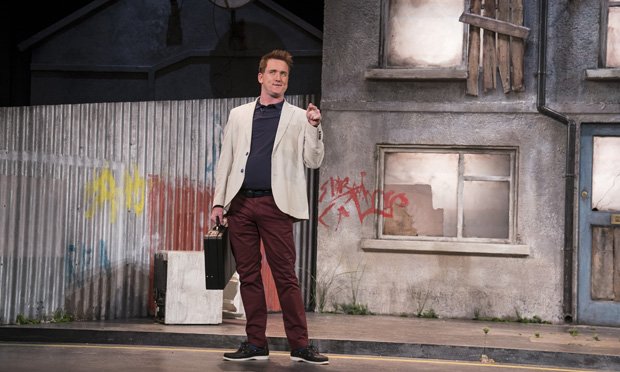 Earlier we learned that the house being sold was, in fact, Ross’s childhood home and this leads to reminiscences about his parent’s marriage and his early family life. Nolan shows here, and in Ross’s account of the birth of his daughter, Honor, a sensitivity that is not immediately familiar to his readers and gives us a more rounded view of the character. Nolan’s monologue is punctuated by phone calls from members of Ross’s family. Laurence Kinlan as Ronan, the Northside son, is excellent. Now working as a conflict and resolution advisor, he calls from the Broken Arms pub in Finglas where he is brokering a truce between two prominent criminal families. Yes, those two! Less convincing are the calls from Ross’s father and his wife, Sorcha.

Postcards from the Ledge is an undemanding and thoroughly entertaining night out. Rory Nolan’s performance is outstanding and Paul Howard’s writing does not disappoint. The show continues in the Gaiety Theatre until November 11th.