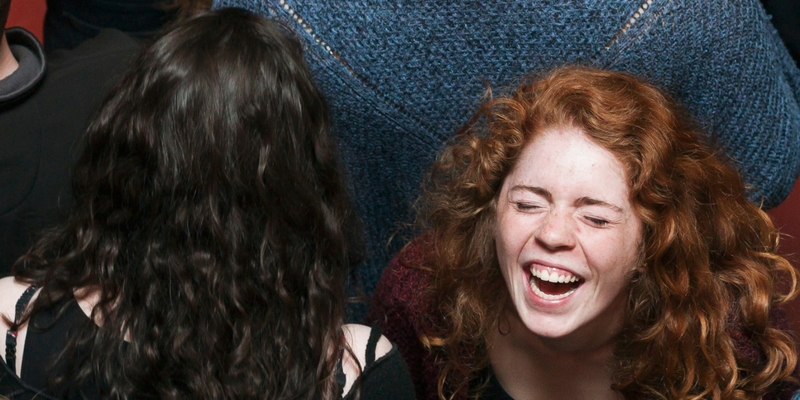 this is a room …. – Project Arts Centre – DTF – Review by Paddy McGovern
Until Oct 1st

Dylan Coburn-Gray’s this is a room … taps directly into the concerns of his young players and their peers. It used a workshop as the springboard from which to launch the company’s exploration of their own characters and factors such as family life and relationships. This develops to encompass the enduring concerns of young people: their fears, apprehensions, self-doubt, longings and ambitions as they grope their way towards maturity. Unsurprisingly, the piece feels authentic, devoid of any attempts to romanticise or idealise what it is to grow up.

The show consciously steers away from a single narrative, opting for a panorama of snapshots, glimpses, moments and half-moments that are charged with meaning and value for the twenty-one young actors.  A repeated device is the alternating between quiet, introspective solo scenes or intimate chat and photographic ‘tableaux’ showing groups frozen in a moment of apparent hilarity while in the company of friends.  The need to feel involved and accepted is central to all. As we glimpse into various (imaginary) rooms, we are tempted to speculate about the family circumstances that shape the individual occupants. That futures may be influenced but not finally determined by background, however, is made increasingly clear at the end.

There are several moments where one longs for a scene to be extended as an actor really engages our interest.  A relationship gels and we want to see where it leads. The couple starting to fall out of love is just one. But this is not the author’s intention.  He presents us instead with a stream of unconnected moments that nonetheless leave us with a very coherent overall impression. Each of the actors rises to the demands of director, Veronica Coburn and her team. Inevitably in such a young company, voice production is uneven and this causes problems in the ‘choric’ passages with words or phrases coming fast from actors at different vocal levels. The problem is exacerbated at times by a loud music/soundscape that is particularly intrusive in the very final scene where two actors struggle to compete with sound that adds nothing. It is a problem that can be readily solved.

Altogether, this is a thoroughly enjoyable show presented with poise, discipline and competence by a talented young company.