Noelle and Addison are two grown up children, still living at home on the Water Orchard. The estate is living off former glories. The water from ’78 was a special vintage but these days their brew is an acquired taste; a little too brown and chemical tasting. Their parents are now elderly. Their father largely spends his time in hiding. Their mother was in good health, that is until now. She was last seen in her study but has disappeared without a trace! The children call for the help of a detective to solve the mystery.

This is a new work by Collapsing Horse who previously brought us productions such as The Aeneid (2016) and Monster Clock (2012). The company are known for their use of puppets and their quirky view of the world and this is no different. While there are no puppets, per se, they do have a ghostly creature made out of a sheet, and also a variety of other toys. These are not over used, and the focus is on the story and the unusual characters within. 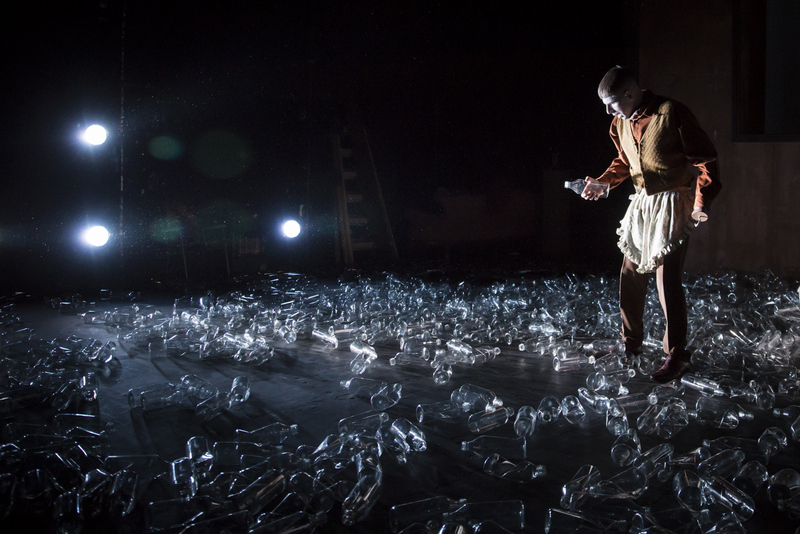 This production has been billed as science fiction, but it is not set in the future. It is more an alternate reality, one where water is something very special, to be appreciated and treated with reverence. People are willing to pay huge sums for a special bottle of it. This aspect of the world is discussed but the family are at the centre of things. They are quite an eccentric bunch; the landed gentry type who are penniless but living in a large house.

The set has a stairs that leads to nowhere and a variety of flats that are moved to create the rooms. Our imagination is required to fill in the gaps in the fading splendour of the big house. There is also impressive use of lighting by Sinead Wallace to create the evocative and eerie spaces. While their usual playful edge is somewhat restrained in this production, they do allow themselves some moments with projections and musical treats.

This is largely a detective tale played with a comedic edge. There is much humour to the piece, but they avoid slap stick for the most part, instead focusing on a darker side. The siblings played by Peter Corboy and Rachel Gleeson are quite ghoulish creations. Addison (Corboy) has a hook for a hand after a finger painting accident and thinks of himself as a beast. Noelle (Gleeson) has something of a temper, dominating any room she is in! John Doran is always enjoyable and is allowed great freedom here as the oddball detective. Breffni Holahan plays a woman impersonating a carer for her own nefarious aims. The production is something of an oddity, but certainly an enjoyable one. If you are a fan of the macabre, then this insight into an unusual world is certainly for you.