We had the chance to talk to theatre director, festival producer and arts advocate Jo Mangan about the Carlow Arts Festival. You can see the results below.

The Festival seems to have events from all corners over the globe. How much travel do you have to do as part of your job? What other festivals do you visit?

I travel quite a bit. There are pretty unmissable events in the yearly calendar such as Edinburgh Festival Fringe and of course Dublin Fringe. It’s quite a hard thing to do actually – to finish a festival programme and look to start programming the next. It doesn’t quite work like that – it’s not so linear. For example, the screening of the 4.5 hour Phillip Glass Opera Einstein on the Beach came about because I was working in the Barbican in London when it was staged there in 2012, so for me I have been looking for an opportunity to share that wonderful experience with an audience since then. And our large-scale spectacle work C’era Una Volta (Once Upon a Time) came about from seeing the company’s work at a festival I was at in Great Yarmouth in the UK a couple of years ago. So even though I’m just back from Brighton Festival and Brighton Fringe Festival last weekend, and was in Vancouver for PuSH Festival in January, work I saw there may not be programmed anywhere for a few years, but the connections made with artists will hopefully bear fruit in the future. 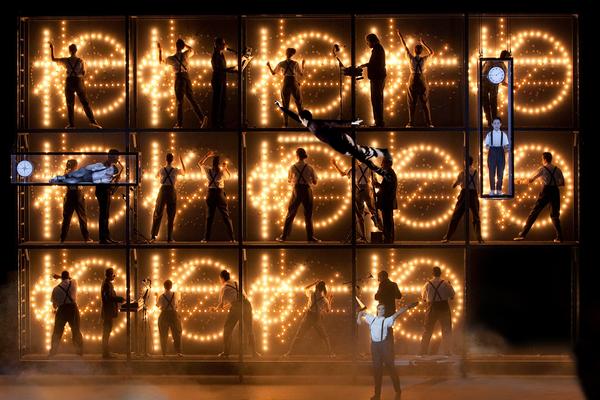 What are the things you’re most excited about at this year’s festival?

I’m really delighted to be rolling out a top notch musical offering at the O’Hara’s Pavilion. Sponsorship from O’Hara’s has really helped us to pull in acts such as The Strypes, Rusangano Family, Emmet Kirwan, R.S.A.G, Stomptown Brass, Sing Along Social and Kelly-Anne Byrne. So, there are no chairs needed this year for the music offerings – we are expecting lots of dancing!

Always central to the festival is the visual arts element, and because of our international open calls and submissions from 850+ artists we are able to present ART WORKS in the extraordinary surrounds of VISUAL, which is without doubt Ireland’s most impressive contemporary Visual Arts spaces, and SITE WORKS, which will see work happening in unusual locations around town including Crash Ensemble who play at the Gothic ruin of Duckett’s Grove.

We have a substantial offering for families too ranging from a Cow-Go-Round from France, where the parents have to milk the mother cow to make the carousel spin, through to one of the most gorgeous shows I have ever seen – Pss Pss. On the face of it, it looks like a simple family show but I saw it in a theatre full of jaded international programmers in Montreal last year and 400 of us very quickly moved from checking our watches, to whooping and cheering and laughing out loud. This simple but superbly accomplished show has played all over the world to huge acclaim and this is its Irish première. 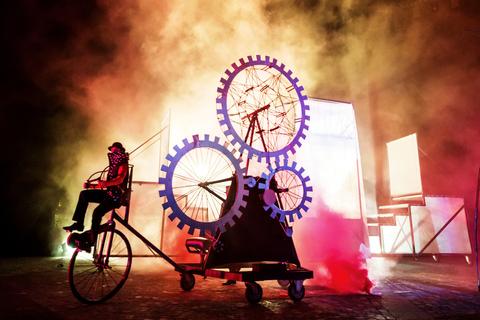 C’era Una Volta by Ondadurto Teatro sounds a fascinating event. What can the viewer expect?

This is international large scale Spectacle at its best. I am very excited about our audience seeing Ondadurto Teatro’s work C’era Una Volta (Once Upon a Time). I was like a kid myself when I saw it – it’s just so joyous. The pictures probably tell the story best, but its full of mechanical structures, water and fire effects, fantastical colourful characters and it all ends with Fireworks – nothing is left out.

It is bizarre for Ireland to have such a vibrant hip-hop scene, with the Rusangano family are at the centre of it. With their album winning the Choice Music Prize, were they a ‘must have’ for the Festival?

I was wondering when our hip-hop scene would break beyond the niche. The emergence of Rusangano Family have I think finally made the wider public more aware of its existence. Runsangano are again so joyous – I see a theme emerging – and bring so much skill to the table that I really wanted the Carlow and visiting audience to experience their raw, passionate and political musical message. Getting this work in front of an arts audience and getting the audience for this work seeing the context of an arts festival as something to engage with, was key in this programming decision. And I want us all to spend the weekend dancing!

Emmet Kirwan crosses the divide between theatre and music. When did you first encounter him?

I actually worked with Emmet about 5 years ago. I’m a theatre director as well as being a festival programmer, and Emmet was in a show I directed called Bog Boy by Deirdre Kinehan back in 2012. It started its life in Ireland and then went on to New York where it was a Best Production and Best Director winner in the First Irish Theatre Festival. Emmet was a director’s joy to work with – just so precise and diligent. His role wasn’t the largest but he spent every moment perfecting it, I just love that kind of rigour.

I’m sure it’s a busy time, but what does your work involve in the weeks leading up to the festival?

We’re deep in delivery mode – so it’s all marketing and production. Today is probably a good example. I’ll be in the office until about 9pm as we are having a volunteer induction meeting tonight and I want to meet with everyone and tell them all about the festival programme so they are up to speed when they meet the public. Earlier today I had a site visit to Ducketts Grove with our Production Manager, Project Manager for the SITE WORKS strand of the festival, and our Marketing Manager – this was to finalise the site, talk logistics and promotion. The rest of the day included: a full staff meeting – we need them almost daily now to prioritise our needs in the run up; the ubiquitous email couple of hours; another site visit to determine the needs for our “Before I Die” wall by American artist Candy Chang; rejigging the wayfinding signage plan; going through the festival site map zone by zone looking at requirements for the Zone Managers; and much more I can’t even remember at this stage – because it’s time to start planning tomorrow already. It’s full-on at this time of year, but I will get a breather once done…a brief breather.