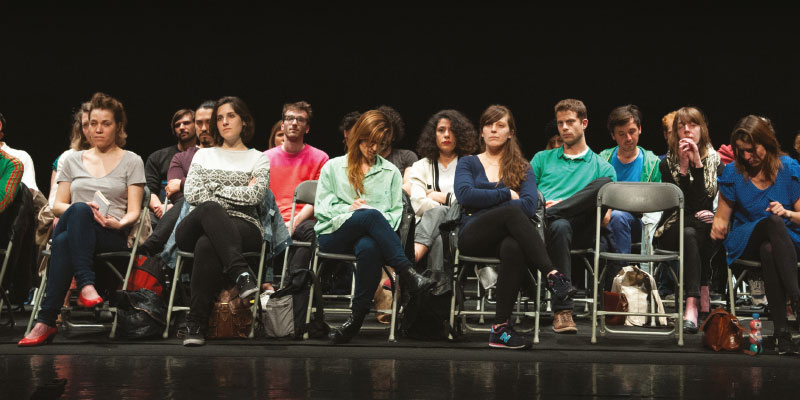 The stage is filled with four rows of empty chairs facing the audience. The cast start to trickle onto the stage, coming on in dribs and drabs. They take their seats in sporadic fashion and start to carry out mundane tasks. They fiddle with their phones, while others read or talk to the person beside them. Surtitles start to appear over the heads of the cast on the back wall. They tell us that these people are here to listen to a talk by a famous theatre director. The texts then tells us about some of the individuals, their hopes and dreams and how they’ve spent their lives up until this point.

This production was conceived by El Conde de Torrefiel, who are a collective from Spain. This is a touring production that is unique in every country it is performed in. The actors on the stage are all ‘locally sourced’ and much of the text is taken directly from interviews with them. The cast do not talk for the duration of the performance. It is solely a physical performance with the text giving them a voice.

There are three scenes in the play, the conference, a Tai Chi class and a rave. The scenes contrast well, particularly the controlled movement of the Tai Chi and the mass of sweaty bodies at the final rave scene. The audience is given a set of ear plugs on the way into the theatre which is quite intimidating! In truth it is no louder than the average gig or trip to a nightclub. 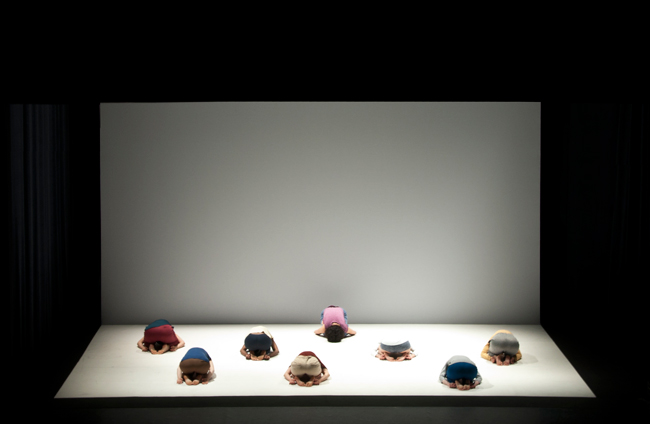 There is also another element to the text, as the play is set a number of years in the future. We are told the world has suffered a series of wars, a number of extreme right wing parties are in control of European countries and other events on a global scale. It is a bleak vision of the future but one that could easily happen.

Some of the text does read like the late night talk of liberal twenty somethings. It edges into economic structures and views of our present times with no huge insight. It works better when dealing with personal issues and insights. The structure is quite unusual and is carried out with style, especially the final dance scene. It is a production that serves as a warning, a vision of the future that we all worry could easily transpire.