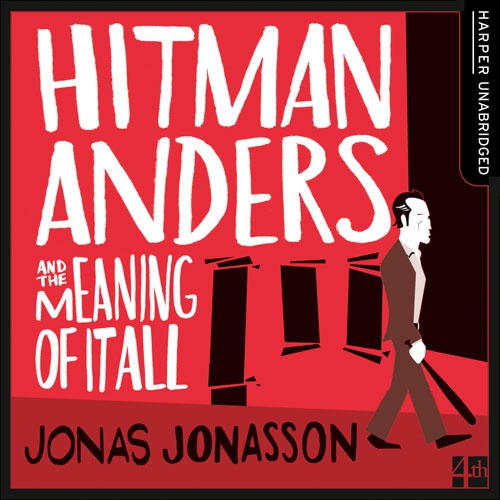 Hitman Anders and the Meaning of it All – Jonas Jonasson – Book Review by Pat V.

If you have read either of Jonasson’s other two novels, The Girl who saved the King of Sweden or The Hundred-Year-Old Man Who Climbed Out the Window and Disappeared you will know what to expect from his latest book. If not, think of Voltaire’s Candide on speed and it will give you some idea of the zany, topsy-turvy world you will find in Hitman Anders and the Meaning of It All. Jonasson’s characters would not be out of place in a Marx Brothers’ film with a logic and an approach to life that seems to belong to a parallel universe somewhere out there which touches our own only in spots.

Here, the story begins when Per Persson, receptionist in a run down one-star hotel meets a female priest, Johanna Kjellander, recently suspended from her parish after she announced from the pulpit that she wasn’t sure if she believed in God but certainly didn’t believe in Jesus Christ. After a rocky start when she offers to say a prayer for Per and then tries to charge him 20 kroner for the privilege, an uneasy friendship develops between them. Soon after, their paths cross with that of Johan Andersson, an alcoholic gangland enforcer, recently released from prison, who is staying in the hotel and who goes by the name of Hitman Anders.

Following a misunderstanding, Per and Johanna find themselves acting as agents for the Hitman, contacting “clients” and organising his schedule of hits which must always comply with his own peculiar moral code – he is happy to break arms and legs and smash up faces but will not kill anyone. After a reluctant start they realise that, in fact, this could be the money making scheme they had been dreaming of, especially as Anders is not too bright and has trouble with figures so they can cream off a bit (in fact, a lot!) on the side. But the path of crime, like true love, never runs smooth and complications soon arise.

The roller-coaster of a story that follows takes us all over Sweden. We meet crime bosses, bureaucrats, vicars, charity shop volunteers, policemen, and at one stage, even the Queen of Sweden makes an appearance. Though there are lots of laugh out loud episodes we can also sense a more serious vein of satire in Jonasson’s depiction of organised religion and the bureaucracy that sustains it. His larger than life characters sometimes appear more normal than the everyday world around them.

In this version for Audible, Peter Kenny is an inspired choice as narrator. His brisk, no-nonsense tone when describing some of the more ludicrous situations adds to the sense of fun and he avoids any deliberate exaggeration simply for comic effect. His reputation as one of Audible’s most popular voice actors is certainly justified and he gives each of his characters a clear and distinctive voice. His dim-witted but determined Hitman is masterly.
This version is available from audible.co.uk and lasts 7h 51mins.