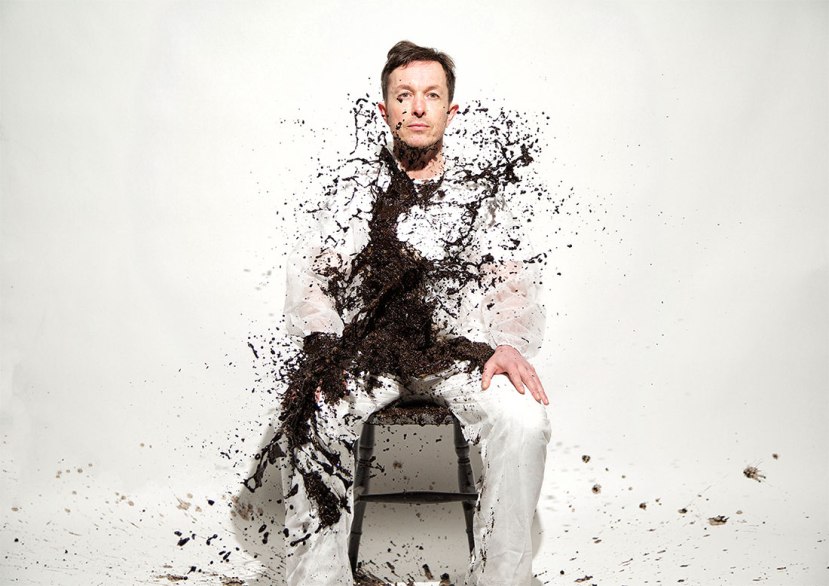 The publicity for this piece of theatre included the following: “Audiences will find themselves in a performance retrospective tracing the path of Osràm’s life and work, featuring videos, photographs, interventions and interactive exhibits.”

On arrival at the Complex there is a large ground floor gallery which includes various written and aural works together with photographs which are displayed in a somewhat random manner which is not unfamiliar to a certain type of contemporary art gallery in the 21st century. More informatively than many a gallery, a catalogue is available. The various viewers looking, listening and trying to read (the lighting was not that good for the smaller items of script) are perhaps on the edge of discovering what these works may be about but perhaps they are somewhat bewildered. A chic dame, heavily made-up, dressed in cut-off black culottes introduced herself, welcomed each viewer individually to the exhibition and emphasised the importance of “Two4One” in Osràm’s oeuvre. This piece was a collaboration “In 1995, just before graduation, he met and fell in love with Clare Black. Together they formed Two4One, a performance duo famous for use of masks and explorations of identity. Two4One were touring the world in 2002 when Clare unmasked them mid-performance , revealing their closely guarded identities. Clare and Gordon split; any communication since has happened only through the press and lawyers”.

Osràm then pursued a highly successful and mega lucrative solo career until 2011 when he disappeared from the public gaze until ‘the announcement of FUNERAL – described as both a retrospective and “Gordon’s last great work of art”’.

The viewers are encouraged to go to the upstairs gallery where a somewhat murky video has an image of Gordon. Then the first performance starts and two people in bear costumes arrive in the centre of the room shackled together. They are not happy. They manage to get their bear heads to fall off and remove the tape gagging their mouths. One of them is Clare Black. She is a very angry person and with a particular venomous anger directed at Gordon. A lot of angst and unhappiness in general is then displayed with the audience occasionally asked to participate in the goings-on in a small way.

This is a new work by Accidental Theatre company, who aim to bring a multidisciplinary approach to theatre, uniting “playwrights, actors, filmmakers, DJs, choreographers, musicians, poets, painters, technicians and curators”. Their approach in this work is similar with an attempt to create an immersive theatre happening/ art exhibition in an unusual space. The purpose underlying this happening was difficult to discern. Certainly some time and effort went into its production, as the works of art, of which there are about ten, are quite elaborate. Perhaps it was an attack on the world of conceptual art. Perhaps it signified nothing. The lack of a clear structure or story left this viewer more confused than satisfied.