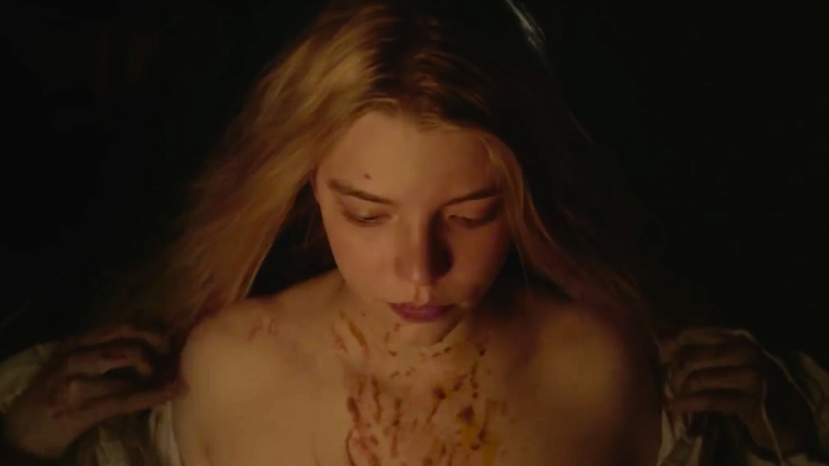 Erstwhile production and costume designer Robert Eggers’ feature debut, The Witch has been steadily accumulating superlatives since its premiere at last year’s Sundance Festival.  Sub-titled “A New England Folk-Tale”, the film is potently imagined and beautifully wrought – although its hold loosens considerably when it strays from its eerie highpoints and into more conventional horror territory.

The film opens in a 17th-century Puritan plantation, from which a particularly devout family, headed by severe patriarch William (Ralph Ineson) and his tightly-drawn wife Katherine (Kate Dickie), have been exiled for ‘prideful conceit’.  Relocating to the edge of an isolated forest with their five children Thomasin (Anya Taylor-Joy), Caleb (Harvey Scrimshaw), Mercy (Ellie Grainger), Jonas (Lucas Dawson) and infant baby Samuel, they begin to carve out a new, ascetic existence.  However, the forest is already home to a witch who makes a meal of Samuel, and whose malign influence permeates the family, leading to recriminations and an inevitable explosion of violence.

The Witch is anchored by an extraordinarily persuasive atmosphere, and by a set of performances far stronger than what one might expect in a conventional horror film.  Ineson and Dickie more than look the part of a careworn Puritan couple, and they play with terrific conviction.  The most startling turns, though, come from the young cast – particularly the luminous Taylor-Joy, and Scrimshaw, both of whom play a number of difficult scenes with nuance and subtlety.

The witch herself is a tremendous creation – albeit briefly glimpsed.  Played in different guises by Bathsheba Garnett and Sarah Stephens, she is somehow entirely of the forest, while being unnervingly otherworldly.  The forest itself is a governing presence in the film – as are the family’s animals, who take on increasing significance as the film progresses.

In fact, The Witch builds such a complete world – and out of relatively limited resources, at that – that it is almost a shame when its various parts begin to coalesce into quite a conventional horror film, complete with jump scares and writhing possession scenes.  Although there’s no faulting the conviction with which these elements are staged, they defuse the haunting stillness of much of the film – dissipating the tension rather than bringing it to a punctuating climax.  The Witch is too good of a film to use these devices – they merely point up the difference between the parlour trick of a stage magician, and the deep, unknowable magic with which the heart of the film concerns itself.

The ultimate direction of the film reveals itself at a very deliberate pace, and will not be revealed here (although it is given away by the film’s main poster, so prospective viewers may want to avert their eyes).  If the journey to this point is never particularly frightening, it does at times feel authentically transgressive, particularly in how the film plays upon the nascent sexuality of its younger characters – a source of energy denied by Puritanism, and therefore ripe to be mined by the supernatural or diabolical.  Hence, the film appears to be linking the emergence of sexuality – particularly female sexuality – to the return of the suppressed energy of a nature that can be held off, but never actually tamed, by colonial influence.  As such, it falls into a fairly venerable tradition of American storytelling, the prime example of which is probably Nathaniel Hawthorne’s Young Goodman Brown (1835), while also touching on the kind of linkage of feminine and natural ‘unknowability’ seen everywhere from the inscrutable forests of David Lynch’s Twin Peaks (1990-1991) to the haunting moon-bathing sequence of Lars Von Trier’s Melancholia (2011).

The Witch saves its hokiest touch for last, as a title card solemnly informs us that much of what we have seen is based on actual 17th-century accounts.  Glossing a pseudo-feminist supernatural story by invoking the authority of a culture that persecuted and murdered women for false accusations of supernatural activity seems a little cavalier, but there’s no denying the power of the period’s language.  People who find themselves reeled in by the knotty cadences of the language would do well to seek out Katherine Howe’s The Penguin Book of Witches, which collects many accounts of the New England witch trials, and testifies, at least, to the authenticity of the film’s surface.