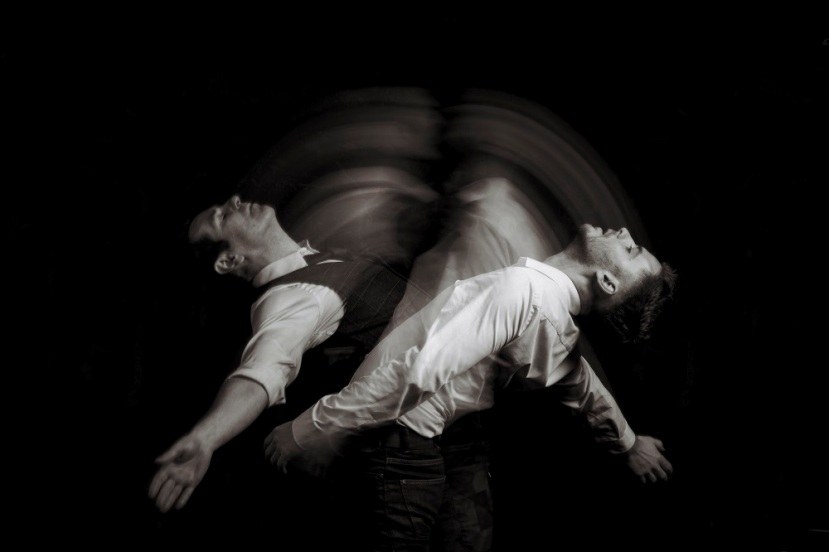 Breandán de Gallaí is a dancer with a rich experience encompassing many forms of dance including ballet, modern, jazz and tap. However his base is predominantly in Irish step dancing. In that capacity he toured with Riverdance for nine years including seven years as principal dancer. That was over twelve years ago and since then he has been involved in a string of academic and practical forays into the possibilities of dance based on his prodigious expertise. A man of many parts, he also has a primary degree as a physicist.

Given his years of experience as a dancer and academic, he is now a man of early maturity. He is also, given his natural physical attributes, a man of some considerable defined substance. His partner is Nick O’Connell who is a young man of fewer years and much slighter build. This chronological and visual dichotomy between the two coupled with the precise synchronicity of their movements becomes one of the continuous joys in the revelatory journey which they together undertake.

The stage is almost bare with a locker at the back on each side accompanied by a simple stool of modern design. As the performance begins each dancer is seated. Between them lies a large screen which goes from the ceiling to about five feet above the floor. On this screen still images and videos appear in black and white. All complement the movements of the two protagonists.  At the beginning projected onto this screen are images which are being drawn by one James Keane at the left hand side of the stage onto a large pad. He works quickly and when he considers an image is complete tears it off the pad and begins on the next one. Each image is in existence for perhaps sixty seconds. These are fleeting moments; there is not any lingering.

Throughout there is an evocative musical score created by Zoë Conway which greatly assists in the development of the interplay of emotions between the two principals. The rapport between them is in perfect unison as they execute a series of finely calibrated body movements with footwork which is exemplary. They together release their step dancing skills onto a new plain which is an exalted one. However it is the weaving of these traditional Irish threads into other forms of dance which makes this performance so exciting. There are many highlights but perhaps the most memorable was a masterful tango with all its Latin American sensual power and an extraordinary sequence when they have a series of opportunities to engage with each other but always at the last moment each loses his nerve and the opportunity is gone.

Linger is the collaboration of many disciplines in the pursuit of excellence. The disciplined rigour of de Gallaí’s academic pursuits combined with his and O’Connell’s exquisite dance skills create a world of many challenges. The observer will experience many emotions as the events unfold. De Gallaí has created a new order with his Irish step dancing skills brought onto a new and elevated plane. It is an order which embraces many emotions and O’Connell is the perfect foil for de Gallaí. De Gallaí and O’Connell are on an exciting journey, it is a joy to watch it emerge.