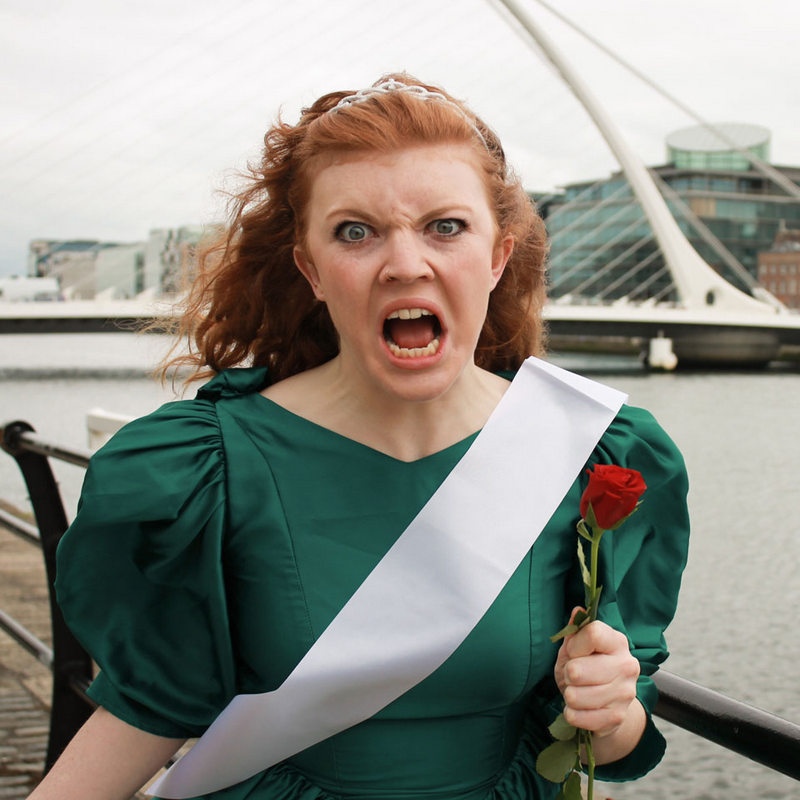 The Rose of Tralee is a uniquely Irish institution where lovely lassies gather in pretty gunas to celebrate their Irish heritage and show off their special talents . If aliens landed on earth during the Rose Festival they would probably depart the planet with a completely unrealistic view of our world since the contest seems to exist in its own little microcosm that once entered keeps a firm grip of you. Despite this people are still quite literally obsessed by the contest and it consistently draws some of RTÉ’s highest viewing figures. Having attended the Rose Festival on a number of occasions (purely for work – honest) I can attest that it is actually one of the most fun weekends you will ever have and the competition is so ingrained on our psyches it was only a matter of time before someone decided to take a wry look at it as writers Erica Murray and Oonagh O’Donovan have here.

Murray also performs this one woman show which sees her take on the persona of all the RoT clichés. There’s the jovial host, the classic Rose contestant, the wild card contestant, the super perky American contestant, the chipper Aussie, the mammy’s boy escort, the butch escort and many more. If you’ve ever watched the contest at all you will recognise these characters. Murray on the whole does a great job of morphing into the multiple roles (although one or two are a bit “samey”) and keeps the momentum going from the off. Every aspect of the contest is ripped to shreds in hilarious fashion and even the red carpet reporters get a look in.

Energetic and witty this is a wry observation of a beloved event and a social commentary on how far Ireland has come since the earlier days of the contest. Thoroughly enjoyable you could almost see the pretty red haired Murray as a contestant herself if she was so inclined. What makes this work is the fact that we have all seen the stereotypes that are being parodied here and we’ve all probably laughed at them in the privacy of our living rooms so doing it as a collective is quite liberating.

Containing one of the funniest catfights since Crystal Carrington and Alexis Colby locked horns in Dynasty this is great fun and will definitely make even the biggest Rose cynic laugh. A word of warning though – if you have never aspired to wear a Rose sash maybe give the front row a miss!