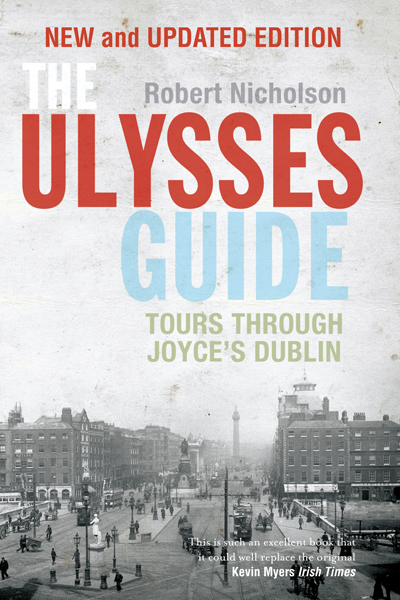 This is an updated edition of the Ulysses Guide – Tours through Joyce’s Dublin. This new edition aims to take into account a number of the changes that have happened in Dublin since the original edition in 2003, mostly notable the Spire and the James Joyce bridge!

The book has a number of chapters, each taken from episodes in Ulysses, such as Sandymount, Eccles Street, Wellington Quay and a variety of other locations around the city. From the opening pages you realise this is an unusual creation as it dwells in two time periods, the time of Ulysses and also the modern age. You are treated to information about the period when Joyce was alive and also the notable alterations to the locations since. The relationship Joyce had with each of the areas is discussed, the time he spent there and people he knew in the locality.

Robert Nicholson is a native of Dublin and studied literature in Trinity college and since 1978 has been the curator of the James Joyce Museum in Sandycove.

There are a number of hand drawn illustrations and maps of the locations as well as photos of some of the buildings mentioned. One of the things Joyce set out to achieve in Ulysses is to capture a city at a particular moment in time. To immortalise a day, the 16th of June 1904. This book aims to add further depth to this and also layer it on top of the modern city that continues to evolve and move away from that moment in time. This book is for lovers of Joyce, but also those who want to explore their city and see it in a new light.