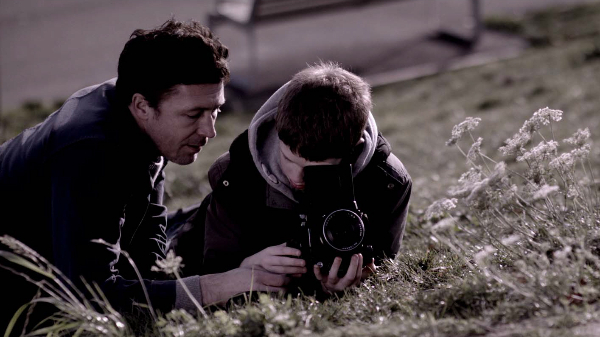 Though Aidan Gillen is one of Ireland’s best known actors at the moment, there has been some criticism recently that the roles he plays, though brilliant, are more ‘characters’ than real believable people. This makes his stunningly underplayed performance in Still all the more satisfying.

Psychological thriller Still focuses on Tom Carver (Gillen), a photographer living in London. A year after his teenage son’s death in a hit and run, Tom is still struggling to come to terms with his grief. Once a promising artist, Tom is now reduced to taking school photographs of disinterested children. He tries to fill in the cracks with alcohol, and the love of gorgeous younger woman Christina (Elodie Yung); but there’s no doubt that his life is as dilapidated as the shabby house he lives in, and not even ex-wife Rachel (Amanda Mealing) or best friend Ed (Jonathan Slinger) can lift him out of it.

There’s a sense that life would carry on mundanely, were it not for a seemingly unremarkable collision with a local youth. This develops swiftly into a feud with a teenage gang; further destabilising Tom’s life, and leading him into a swiftly escalating path to destruction.

The strength of the film is how terrifyingly real it all seems. Apart from the threatening unknown of the young gangs roaming the streets, there are no heroes and villains; and all the central characters are incredibly complex and flawed. There’s a great damaged chemistry between Tom and his ex-wife, and unfulfilled journalist Ed is seen aimlessly driving around in search of the answers he’s looking for. Even the youths can revert to scared children when cornered.

The climax of the film leaves a few plot strands behind, but supported by a moving soundtrack and atmospheric cinematography, Director Simon Blake’s debut feature is an incredibly powerful film, that’ll leave you shell-shocked for hours after.