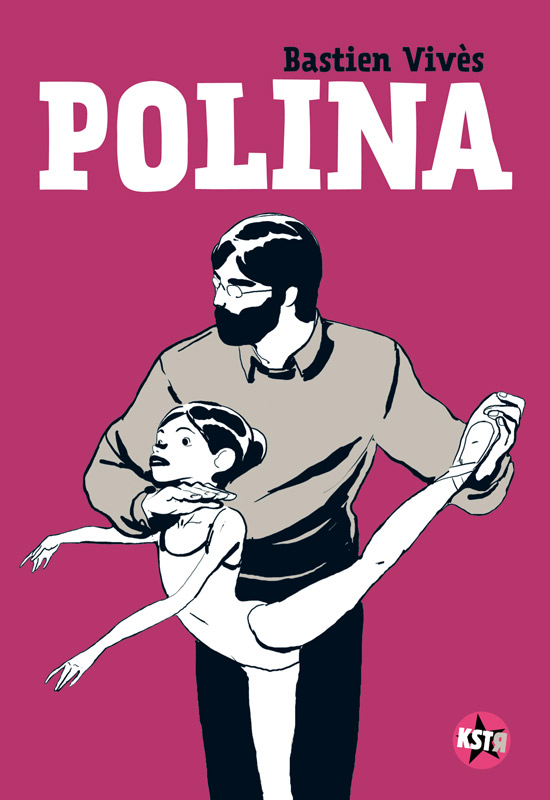 Polina by Bastien Vivès is publised by Random House.

Polina was written and illustrated by Bastien Vivès in 2011 and published in France by Casterman. It was recently published by Jonathan Cape as a  large hard back format graphic novel. We reviewed one of Vivès previous collections ‘The Taste of Chlorine’ here and while that collection was quite beautiful, the brevity and lack of a strong narritive reduced the book to something quite ephemeral. It was the type of book you could read in one sitting. This new work has more of a emphasis on the story, and while the art work is still very impressive, it is not the full focus of the work.

Polina is the tale of a young girl that loves to dance. We meet her as a small child bundled into the back of her parent’s car and going to her first dance lessons. You can feel her fear as she lines up with the other students to perform in front of her new teachers. It is the dream of many young girls to be a ballet dancer, but few go beyond the initial years. Being a dancer is a difficult dream to pursue and we get to follow Polina as she moves through the various stages of her education. It is not a straight forward tale, and you can see her development as a person as much as any other aspect. Not all of her choices are for her craft, and she follows her heart on some occasions to the detriment of her work.

One of the more interesting relationships in the novel is between Polina and one of her teachers Bojinsky. During her teenage years, he is feared but later they meet and the balance of the relationship has changed. It is an interesting insight into the way a teenager views the world and their struggles with self confidence.

The illustration are in black, white and grey/brown but it is first and foremost about the rich line drawing. The images are quite stylised and do not attempt at realism, but the poses and movement of the dancers is captured wonderfully. It is quite an evocative style, that adds to the story and portrays the movement and grace of the dancers.

Bastien Vivès is first and foremost an illustrator, and this work is ultimately more interesting to look at than to read. This is a more substantial tale than its predecessor and while the resolution is predictable enough, there are enough twists and turns along the way to keep the reader occupied. It is a story of a deep passion and an individual with talent that needs to follow her own path.

Polina by Bastien Vivès is published by Random House.