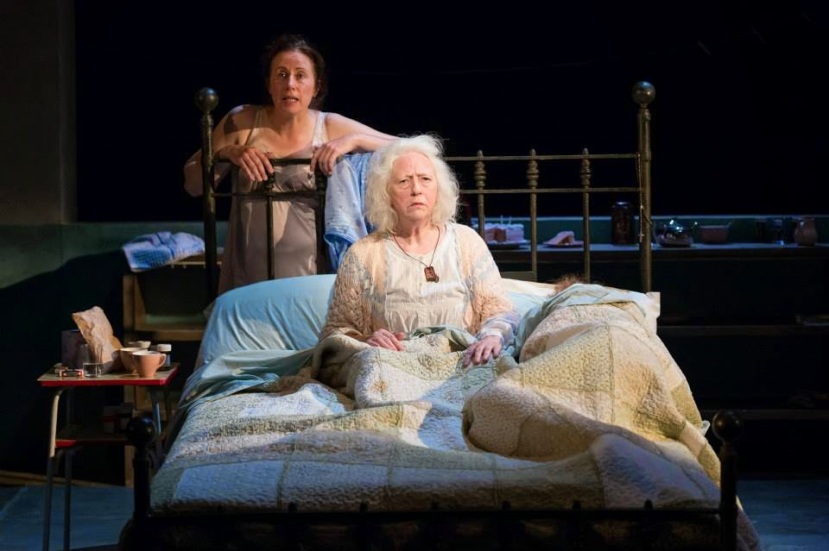 Bailegangaire opens with Mommo centre stage, sitting on her throne which is also her wrought iron bed. The same old farmhouse kitchen that thirty years before in ‘Brigit’ was charming is now decrepit and neglected. The fireplace is boarded up and soft lamplight replaced by a bare light bulb. The passage of time is apparent Mommo is engaged in telling us a story. It is a fantastical story and she tells it wide eyed, embellished with gesturing and grandiose language. It is quickly apparent that her story is nonsensical and Mammo is senile and raving. For the length of the two-act play Mommo continues with her story telling, stopping and starting, picking up and letting down, retelling parts. She is seemingly oblivious to the other drama playing out between the two sisters, Dolly and Mary, who in ‘Brigit’ are young girls.

Mary is the sensible one, trained as a nurse she has returned to care for Mommo but is feeling unappreciated and tormented by Mommo. Dolly whose “film star looks” have trapped her in a miserable marriage is waspish and unhappy. Both girls try to out do one another, telling of the wretched time they’ve had and it’s a stiff competition. Meanwhile Mommo raves from the bed about another competition. It is a laughing competition in which Mommo’s own family misfortunes are the source of mirth in the town without laughter. Throughout the play there are constant hints of these misfortunes that have befallen the family. The troubles of their upbringing are reflected in the two sisters onstage, frustrated and unhappy with their situations. It is only as the play draws to a close these tragic events are fully revealed.

Marie Mullen as Mammo is like a high queen and never has ráiméis been so riveting. She switches between impish raconteur to cranky crone and we are never fully sure how completely her grasp on reality has slipped. Catherine Walsh captures the harried world-weary sister Mary to a tee and she moves across the stage with the burdens of the world on her shoulder. Aishling O’Sullivan is truly outstanding, she plays Dolly with gruff country glamour, so bitter and funny and oh so tragic. The quality of the performances by the three women involved bring this melancholy tale to life.

Bailegangaire runs until Oct 5th.Find out more about Druid here.