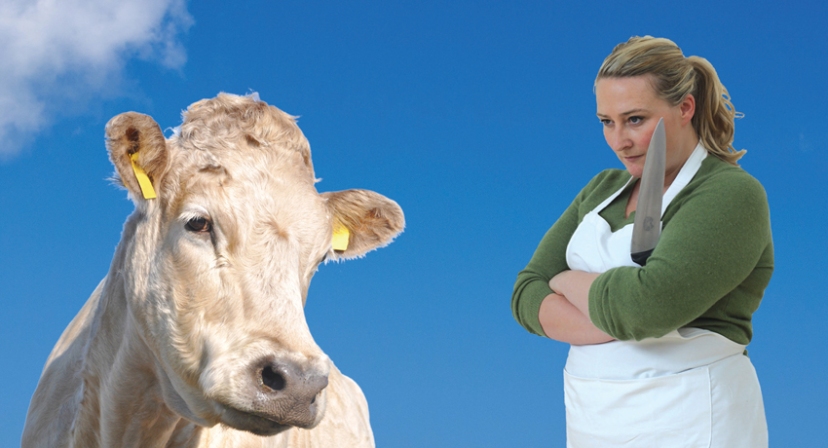 Telling the tale of a person and their nemesis, the protagonist and antagonist, has great precedent in theatrical history; but not often is that antagonist a Charolais heifer. Charolais tells the story of a woman’s fight for her farmer boyfriend’s attention; while having to share the limelight with not only his prized heifer, but also his prized mother, who still lives with him at the farm.

It’s refreshing to see a contemporary show that gets to the heart of real country life, where jeeps are covered in mud and straw, not used for the school run; but the characters are recognisable, down to earth people, not remote communities out of touch with modern life. From the opening moments of the play, as Siobhan (Noni Stapleton) clambers onto the stage with a dirty kitchen knife, a blood stained apron, and a heavily pregnant physique; there’s no doubt that these are issues of life and death. This may sound a big brash show, but under the surface lies the very personal story of a woman looking for intimacy, family, and a real place to call home: she may talk big, plotting the untimely downfalls of both cow and mother-in-law, but Stapleton (who also wrote the show) performs with a great sense of honesty, and vulnerability.

Assisted by Bairbre Ni Chaoimh’s expert direction, there is just the right balance between humour and more emotional moments: there’s a great sense of fun as Stapleton transforms into the wonderfully sensual French heifer with a mere flick of the hair, but Charolais is also surprisingly moving. The characters may have their flaws (plotting murder etc.) but they’re also hugely sympathetic, and you really care what happens as the play draws to its climax. Charolais is a brilliantly dark and original show, demonstrating exactly what the ‘Show in a Bag’ can offer. I hope it’ll have the opportunity to tour the countryside in future, but go and see it now while it’s still in town!

Charolais runs in Bewley’s Cafe Theatre until the 19th, as part of the Tiger Dublin Fringe.