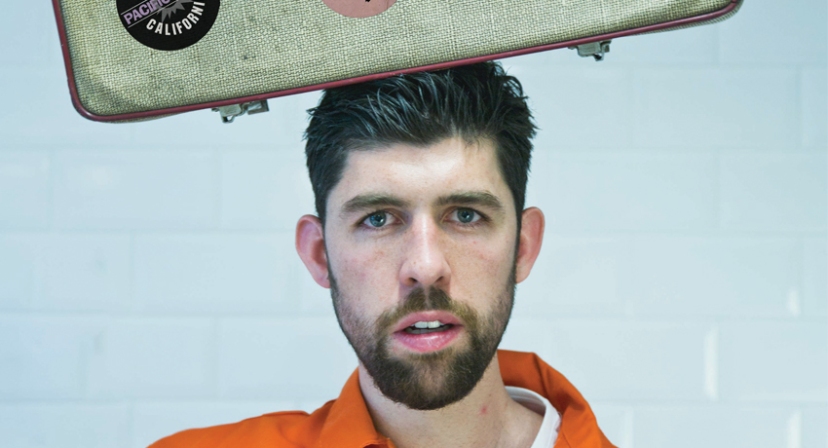 Pilgrim is a one-man show but you don’t tire of the one man Rex Ryan because he presents himself in many guises. Ryan mainly plays Christy, a brash, drunken, obnoxious young man from Dublin, whose swagger thinly veils an uncertain and vulnerable personality underneath. Christy has spent a hedonistic few months in America drinking, partying and generally shirking from responsibilities back home. The most terrifying obligation in Christy’s eyes is eminent fatherhood; his girlfriend in Ireland is soon to have his child.

The background setting to this play is a true story from the immediate aftermath of the 9/11 attacks. As part of the American security response planes were excluded from U.S. airspace. These planes containing thousands of passengers of every nationality were redirected to airports all over Canada. Temporarily stranded the passengers found themselves without food, shelter or money. Gambo in Newfoundland was one such town and Christy was one of the ‘plane’ people that descending upon the community. The townspeople opened their homes and their hearts to these travellers and showed extraordinary generosity towards them. Christy witnesses these gestures of kindness and humanity during those stranded days. They have a profound effect on him and he reflects and takes stock of his own life and comes to important realisations.

The show is populated with twenty-seven characters in all. Rex Ryan makes multiple rapid switches between personas. Ryan carries the show with remarkable energy and stamina. Never once faltering during the ninety-minute production, it’s no surprise to learn Rex Ryan was a best actor nominee at last year’s Fringe.

The writing in this play is almost lyrical. The writer Philip Doherty manages to blend the crudity and colour of Christy’s speech to produce something authentic that is musical and funny and very pleasing to the ear. Multimedia is an important part of the show. Projected images and a haunting soundscape smooth the transitions between scenes past and present. There is clever use of voice-overs for episodes that flit back to Christy’s home in Ireland.

If there is one failing it is that things are spelt out a little too clearly for the audience and played out a little too painstakingly. We are hand held through Christy amazing enlightenment. The complete and profound transformation by the main character in those few short days struck me as over simplistic and one-dimensional. Maybe by so ambitiously creating some many characters Christy himself is not completely coloured in. However the events of 9/11 were so unbelievable and unreal that extraordinary things did happen to ordinary people.