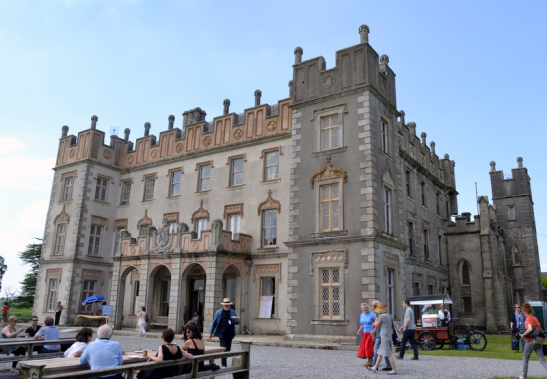 Details of this year’s Festival of Writing and Ideas have been released, and once again it’s pretty impressive. The festival takes the form of a series of interviews/ discussions between formidable adversaries! While it doesn’t have the pulling power of Martin Amis or PJ Harvey, this year’s happy couples include: Stephen Frears & Philomena Lee, John Butler & Paul Murray, Olivia O’Leary & Joseph O’Connor, John Banville & Mariella Frostrup, Patrick McGrath & Pat McCabe,  John Boorman & Katrine Boorman and Sebastian Barry & Roy Foster to name but a few.

Check out the full details below or visit their web site here.

“The Festival of Writing and Ideas has pretty much knocked it out of the park in terms of small festival programming…a brilliantly eclectic line-up of speakers.” – The Irish Times

Come and join an exceptional gathering of writers, historians, performers, activists and commentators for the highly acclaimed Festival of Writing & Ideas in the magical setting of Borris House, Co Carlow. This year’s festival, the third, offers an opportunity to exchange ideas with a diverse and stimulating mix of celebrated national and international thinkers and storytellers.

Film-maker Stephen Frears will be joined by the extraordinary Philomena Lee, to talk back over how his recent film of her story, Philomena, has bought about such change. The compelling Lance Armstrong story is the subject of director Stephen Frears’s next film, and he will discuss it with journalist David Walsh who exposed the scandal. John Butler, director of The Stag will have a banter with fellow novelist Paul Murray on his theory that “dying is easy – comedy is hard”. Olivia O’Leary will talk to Joseph O’Connor about his new novel and his love of music, while Louis de Bernières may even play the famous mandolin.

Booker Prize-winner John Banville will discuss his intriguing double life as novelist and thriller writer with the journalist and broadcaster, Mariella Frostrup while the master Patrick McGrath will talk about doubt and insanity with fellow novelist Pat McCabe. “A True History of Lies” is the subject for discussion between novelist Sebastian Barry and historian Roy Foster. It examines how the Irish past is remembered, forgotten and celebrated.

“A female writer cannot afford to feel her life too clearly. If she does, she will write in a rage when she should write calmly.” Touching on this theme will be Booker-nominee Deborah Levy who is sure to stun audiences; and Eimear McBride (author of the “boldly original and utterly compelling” A Girl is a Half-Formed Thing) will talk to novelist Donal Ryan on “only being safe inside yourself”.

Singer and animal rights defender Cathy Davey meets poet and tiger conservationist Ruth Padel to discuss creatures and lyrics: both are known to break out in song. As is the lyrical Lisa Hannigan, who will, with fellow podcaster Dylan Haskins, chat to Damien Barr, author of “Maggie and Me”.

Human rights and global conflict will be the focus of a number of sessions: New York Times Pakistan Bureau Chief Declan Walsh, expelled from Pakistan a year ago sits down with historian William Dalrymple; lawyer Jason McCue, who won a landmark case against the Omagh bombers, meets journalist Kevin Myers. War photographer and landmine survivor Giles Duley returns to Borris to talk about why he does what he does. And novelists Hugo Hamilton and Audrey Magee will discuss a common theme in their work: Berlin and its legacy.

Mikel Murfi will perform his one-man show “The Man in the Woman’s Shoes”. There will be readings, singing, performance and film. John Boorman will discuss his new film with his daughter Katrine; visual artist Gerard Byrne will discuss the ideas behind his work. And Blackadder actor Tim McInnerny will look back at his roles of Captain Darling and Lord Percy.

The literary cabaret ‘5×15 Stories’ will dazzle and surprise us once again with 5 extraordinary speakers holding forth for 15 minutes each.