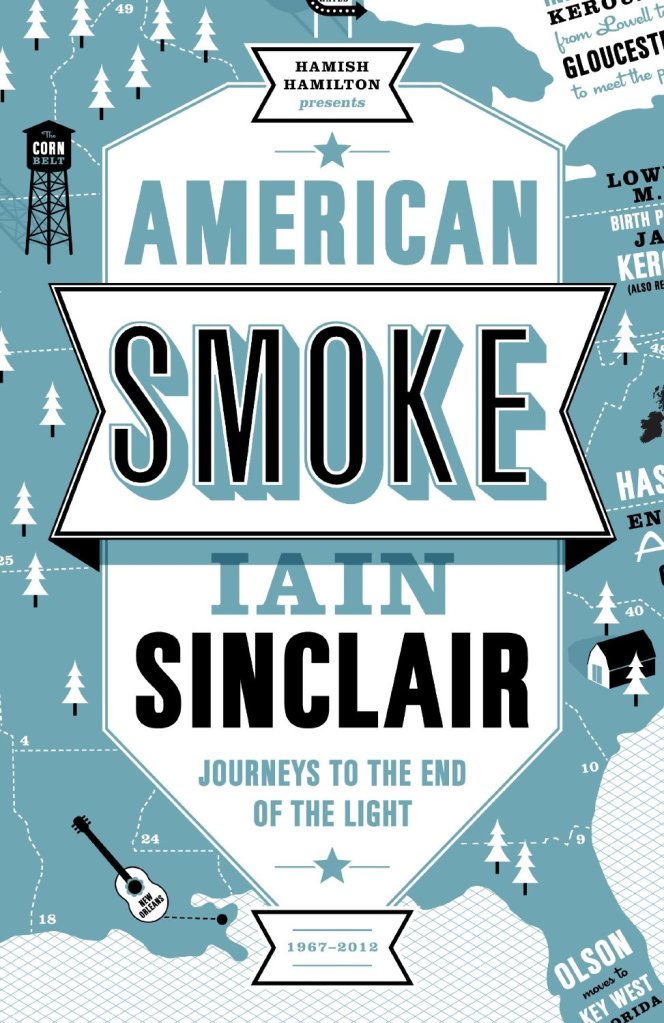 In “American Smoke” Iain Sinclair traces a path through the landscape of the United States and the channels of his memories, searching for the ghosts of his literary heroes. Subtitled “Journeys to the end of light” his subject, the American beat writers, are by now almost all deceased, the narrative flits from the fifties to the present day as Mr. Sinclair includes accounts of many a cultural pilgrimage.

Divided in to four or five sections with shorter sub-chapters, each section of the book covers a number of trips. Chiefly these are taken by the author and various companions, but more often than not his wife Anna. Allowing us to presume this is a volume of non-fiction memoir Mr. Sinclair pulls a neat confidence trick. We need to go along for the ride adding a grain of salt. Take Mr. Sinclair’s response to the question posed by Max Liu on http://blog.frieze.com/[1] when innocently asked about his relationship with Cal Shutter a writer that crops up in the section dealing with California. Mr. Sinclair reveals that Shutter is a fabrication. “There is no such person, I’m afraid”. Constructed characters sit alongside “true” literary figures like Bolaño, Kerouac and Burroughs. Note to non-literature scholars –  a bit of furious googling helps distinguish the wisps from the willows. A second glance at the title page shows we were forewarned – “A fiction of memory”.

Many of the journeys and events the beat writers described in books like “On the Road” or “Junky”, we‘re a stew of fact, fiction, memories and hallucinations. Here, Mr. Sinclair’s approach feels spiritually consistent. Possessing a rare gift for words some descriptions and passages are hauntingly beautiful and resonate long after you close the book. The great state of Massachusetts tourist board owes the author a debt such are his enthralling descriptions of the landscape. Particularly those of the seafaring haven of Gloucester; so evocative you taste the sea spray and long for a welcoming Inn:

Ok, maybe the kids might prefer Florida for the holidays, but Mr. Sinclair’s pedigree as a biographer of place is to the fore. Pop culture references can crash in at any time; later, still in Gloucester, he reminds us the George Clooney picture “The Perfect Storm” was set here; an “inauthentic fiction” utilising the authentic “Crow’s Nest” fisherman’s bar.

The book is crammed with these types of descriptions weaving a meandering path back and forward through Mr. Sinclair’s recollections. Reveries sit with some more documentary passages. Past works by the author invade the narrative and other sources are tapped, like Anna Magnani’s diary account of the filming of the [1950] movie ‘Vulcano’ in and around Sicily which gets an entire chapter.

Mr. Sinclair’s mind seems capable of picking a thread through seemingly unconnected events. Finding the intersection seems to be his real focus. Take his descriptions of early morning scouting walks through Seattle “sniffing out breakfast bars to share with my wife on a second circuit”, this reminds him of Malcom Lowry who recounted a similar technique, which puts him in mind of Burroughs in Kansas and the walks he recorded in his dream diaries, which then reminds him of Albert Speer, a prisoner in Spandau, walking the prison garden, measuring his stride and attempting in his mind to walk west across the Bering strait and Siberia to northern Europe using a self-invented system to stave off boredom. From the first Starbucks to a Nazi war criminal in a few pages.

“American Smoke” is an engrossing experience for fans of the Beat writers although Mr. Sinclair’s virtuoso prose will win over many more. PS – Look out for the hard-cover edition which has a beautiful fold out map masquerading as a dust jacket.

“American Smoke – Journeys to the end of light” is published by Penguin and available now.