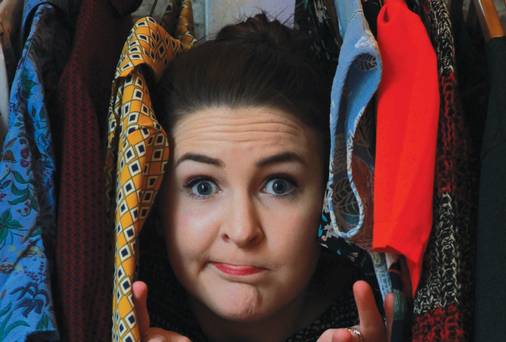 After a successful run in Bewley’s Cafe Theatre last year as one of Dublin Fringe Festival’s ‘Show in a Bag’ productions, Counter Culture now comes to the New Theatre. Expertly performed by Katie O’Kelly; the show deals with life on the shop floor of Macken’s Department store, presented through the eyes of its long-suffering employees.

From the opening, as a personified snowflake meets the statue of Jim Larkin, we become aware that maybe not as much has changed for workers in Dublin over the years as we might have thought: We enter the store as management prepare to dish out ‘Zero Hour Contracts’ to all employees, ending the possibility of sick pay or guaranteed hours. Once the snowflake has entered the layer of upper-management, O’Kelly can transform swiftly from character to character, introducing us to the snivelling assistant manager, the kind-hearted doorman, heavily pregnant Gemma; and her grandmother Bridie, who has worked in the store since her youth. Each is presented with clarity and personality, but as the ‘lead characters’ join a range of other personalities who frequent the store, the constant movement from one character to the other gets tiring. The result of this is that, although the whole world of Macken’s is expertly presented, the audience is left on the outside, making it harder to get emotionally involved.

The setting of the Irish department store (which somehow has a different atmosphere to those in other countries) is likely to be familiar to audience members; and many will be familiar with historical events like the Lockout, and the Clery’s Strike in the 1980s, which are presented with a light and personal touch. Even though the show was competently written and performed by Katie O’Kelly, and well directed by Donal O’Kelly; the final result is sadly lacking the magic that makes you really care about the conclusion, and the play does not feel as fast paced as its short running time would suggest, despite an energetic performance.