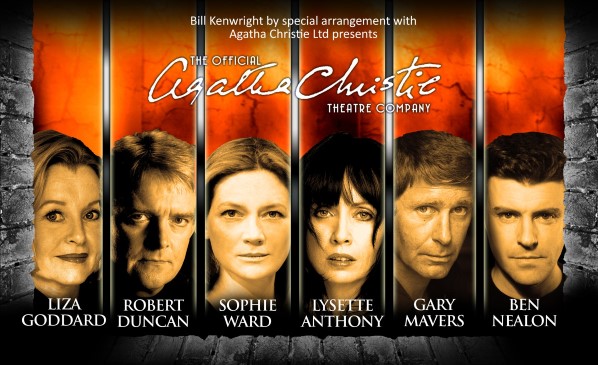 By the time of her death in 1976, the estate of Agatha Christie claims that worldwide sales of the author’s books were exceeded only by Shakespeare and the Bible. An impressive statistic, and a sensible choice of base material for a production company looking to create theatre with mass market appeal. Under the banner of The Agatha Christie Theatre Company, Bill Kenwright Ltd has been touring the UK and Ireland with Christie’s stage plays since 2006. It comes as no surprise then that the company’s tenth and latest production of Go Back For Murder is a polished piece of work with a professional cast playing out the oohs and aahs of the murder mystery genre to a familiar beat.

Currently at the Gaiety for a week-long run, Go Back For Murder is almost too neat, lacking the suspense of Christie’s more famous works, the well-trodden exposition and reconstruction format working to peak our curiosity but failing to make us care. Characterisation is at fault here, with the first act entirely given over to explaining the plot by painstakingly telling Carla Le Marchant – and the audience – the facts of what happened to her father twenty years ago on that fateful afternoon in 1940’s England.

What happened is murder of course, a poisoning to be precise, that saw Carla’s mother Caroline Crale die in prison for her supposed revenge on adultering husband Amyas (portrayed with the right mix of charisma and chauvinism by Gary Mavers). Sophie Ward gives a convincing turn as both mother and daughter, switching from Montreal drawl to a British upper class accent in the second act, and as she prances around the stage in her bright geometric 1960’s shift dress, determined to prove her mother’s innocence, all action revolves around Carla, including an underdeveloped love subplot with Ben Nealon’s meticulously articulating solicitor Justin Fogg.

But this is Agatha Christie, and the audience is not here for love. The second act fares better on the suspense and mystery fronts as the five guests who were present at Caroline and Amyas’ house on the day of the murder take us back to watch the build-up to the main event. Part of the pleasure in any Christie work is to sniff out the false leads and try to guess the twist before it’s revealed. Could it be Amyas’ young mistress-muse Elsa Green (whose flighty hysteria is played to the point of farce by Lysette Anthony), or perhaps Liza Goddard’s entertaining governess, still pledging her loyalty to Caroline twenty years later? Plausible too is impish younger sister Angela Warren who resents Amyas for diverting attention away from her, not forgetting neighbouring brothers Philip and Meredith Blake (Robert Duncan and Anthony Edridge) who were both in love with and spurned by Caroline in favour of renowned artist Amyas. While ample motives are given and the plot comes to life, literally, in the second half, the twist is too signposted during the reconstruction to leave any real suspense for the reveal.

Based on the Poirot novel Five Little Pigs, the murder mystery basics are all there, though not at their most engaging. There’s a reason why The Mousetrap is the longest running play in history, and its clever character relationships and subtly leading dialogue is missing here. Fans of Christie will still enjoy the production. Simon Scullion’s set design and Brigid Guy’s costumes give a brightness to proceedings that match the pace of the action, with attention to detail such as the high-waisted shorts worn by Elsa as she poses for her painting, or the retro glass lampshade in the bar scene, helping to make the switch between the two eras seamless. “Memory,” says one of the suspects near the end of the play, “is a fragile thread, and uncertain.” Most of the elements of Go Back For Murder are about as fragile as an ox, but if you’re after dead ends and gory details, you could do worse for a partner in crime.

Go Back for Murder runs at the Gaiety Theatre until November 16th, with tickets from €17.50.