The Fry Chronicles on Audible – Review 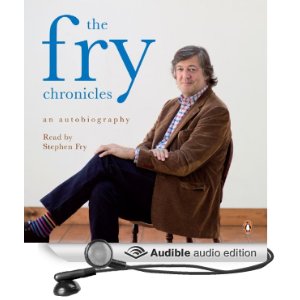 I love Stephen Fry. I should get that out of the way now. I have read all his novels and the first of his autobiographies, Moab is my Washpot. I religiously watched A Bit of Fry and Laurie (soupy twist), every series of Blackadder and Jeeves and Wooster whilst growing up. I may even be partial to a bit of QI in my adulthood. The first part of his autobiography, Moab is my Washpot, was published in 1997 and covers the first 20 years of Mr Fry’s existence. The Fry Chronicles continues on from there to cover the next 7 years of his life. This period covers Fry leaving prison and taking up his place in The University of Cambridge, where he subsequently joins Footlights and meets Hugh Laurie. In this period he also rewrites the musical Me and My Girl, which becomes a global success and makes him his fortune in his 20’s. The book ends in 1987 and a third autobiography is planned.

Mr Fry is extremely self-deprecating about this time. He felt that he had been given a second chance after a misspent youth getting caught out for credit card theft. His peers at university were Ben Elton, Rowan Atkinson and Emma Thompson and he writes of his awe at their talent. He is a man who is often crippled with self doubt, as anyone who remembers the debacle of the Cell Mates play with Rik Mayall in 1995 can attest to. He has been brutally honest about his battle with Manic Depression and the end of the book explores his taking of cocaine, which he used to numb his anguish
about his depression.

Audible is a perfect platform for exploring this autobiography as it comes alive in Fry’s retelling of his college anecdotes, working in the world of media in the 80’s where he had more money than sense and could brandish around his own credit cards and his love of the Apple Mac. This is a brutally honest autobiography letting the reader behind the mask of the witty television persona to explore the darker side of his personality.