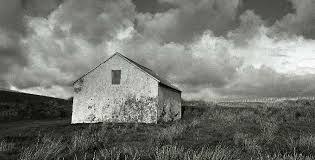 Three brothers live under the same roof with their brute of a father; Ephraim. There is no love lost between the various members of the family, and it is not the easiest of households to live in. Ephraim has been married twice before and is now in his 70’s. All three of his adult sons are waiting on him to die, so that they can gain control of the farm. When Ephraim disappears, news that he has got married for a third time returns to the young men, and they realise that they will no longer inherit the land. The delicate balance in the house has been upset, and trouble will arrive with this new wife.

This production is filled with impressive performances, and while you will struggle to find a sympathetic character on stage, it does create a strange world for the variety of villains to plot their revenge. Director Annie Ryan has created a bleak world and even the set establishes the aura of desolation, with it’s grey backdrop and soil covering the stage, only broken up by the pieces of timber at the back of the set.

This production is harsh and unrelenting, and takes on this uncompromising Eugene O’Neill story, never flinching from the tale of hatred and greed. The story has been translated to Northern Ireland, with accents of the various characters to suit, and this does not sit well with the talk of California and the gold rush, but this is a small issue in an otherwise impressive story. Many may find the tale too harsh and gritty, but for those of you made of sterner stuff, this is a strong and powerful piece.

Corn Exchanges production of Desire Under the Elms by Eugene O’Neill runs at Smock Alley Theatre until Oct 13th.

Set and Costumes by Maree Kearns